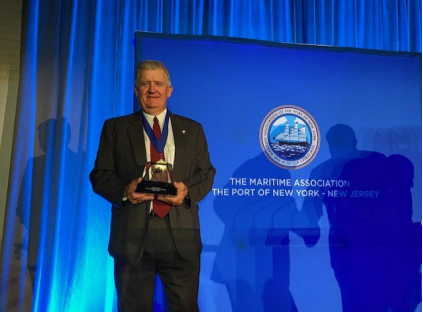 Port Houston Executive Director Roger Guenther was inducted on May 18 into the International Maritime Hall of Fame by the Maritime Association of the Port of New York and New Jersey (“MAPONY/NJ”).

“I am honored to be recognized and included on this list of leaders inducted before me who are pioneers of our industry,” Port Houston Executive Director Roger Guenther said. “This award further highlights the great work of our local maritime community and the commitment of the entire Port Houston team to keep trade and commerce moving for our region, Texas, and the nation.”

During the annual Awards Dinner in New York City, Guenther was honored alongside five other global shipping leaders who have demonstrated exemplary leadership and dedication to advancing the industry through innovation, determination, and volunteerism. Guenther was introduced at the ceremony by Port Commissioner Clyde Fitzgerald.

“I am so honored to congratulate Roger on receiving this most distinguished and prestigious honor of being inducted to the International Maritime Hall of Fame. No one is more deserving of this honor than Roger,” Fitzgerald said. “Through some very difficult times, Roger has steered Port Houston to record cargo volumes with great efficiency. This recognition of Roger is an honor for the entire Port Houston community. We are grateful to have him as our Port Director.”

Other members of the Port Commission echoed those sentiments, including Port Commission Chairman Ric Campo. “Roger has dedicated his career to Port Houston and the growth of cargo in our area. His strong leadership is evidenced through so many milestones met and partnerships made during his time as Executive Director,” Campo said. “I thank him for his commitment and congratulate him on the great honor of being inducted into the International Maritime Hall of Fame.”

“As one of our most dynamic partners, Roger and his team at Port Houston have fostered a truly collaborative relationship with the Corps of Engineers that has resulted in innovative delivery of Project 11. His leadership has allowed the Port and the Corps to deliver the project faster and more efficiently than any of its kind in the nation,” Galveston District Commander of the U.S. Army Corps of Engineers

Col. Timothy R. Vail said. “On a larger scale, Roger has an innate understanding of how vital Texas waterways, large and small, are to our Nation and he is purpose-driven in his efforts to ensure those waterways are recognized for their national significance.”

Peers across the industry also shared their words of congratulations and admiration for Guenther and acknowledged the significance of such an award among the maritime industry.

“Roger is always willing to listen, sees clearly what the port stakeholders need now and in the future, and acts decisively on it,” Hapag Lloyd, L.L.C. President Uffe Ostergaard said.

“On behalf of MSC USA, I’d like to congratulate Mr. Guenther on his induction into the highly prestigious Maritime Hall of Fame, in recognition of his contributions to the maritime industry,” MSC Mediterranean Shipping Company (USA) Inc. President & CEO Fabio Santucci said. “His vision, wealth of expertise, and professionalism are deserving of this distinguished honor.”