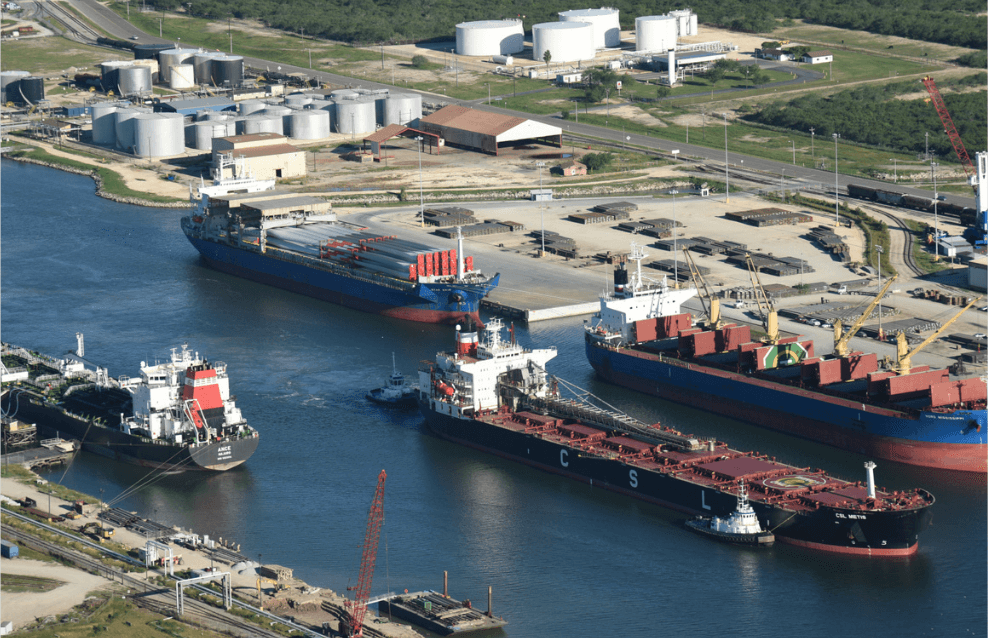 Photo courtesy of the Port of Brownsville.

The Port of Brownsville will receive $68 million through the U.S. Army Corps of Engineers toward deepening the Brownsville Ship Channel in order for the port to accommodate larger vessels and remain competitive. U.S. Representatives Filemon Vela and Vicente Gonzalez made the announcement Tuesday, April 5. The funds are part of $79 million from the Bipartisan Infrastructure Law for “historic water infrastructure projects” in Brownsville and Galveston that will have a big impact on South Texas, according to the announcement.

“The $68 million investment to deepen the Brazos Island Harbor Channel at the Port of Brownsville in Texas will enable increased cargo movements, reduced transit times and improved operational safety,” they said. “Completing the deep draft navigation project is a high priority for both the Rio Grande Valley and the state of Texas as a whole.”

Brazos Island Harbor Channel is the official name for the Brownsville Ship Channel. Galveston will receive $11 million to deepen a portion of the Galveston Harbor Channel.

Eduardo Campirano, Port of Brownsville director and CEO, called the announcement “big news.” The $68 million will go toward phase two of the deepening project, he said, adding that “this is the biggest shot we’ve gotten at one time.” Phase two involves deepening the channel from the western boundary of Rio Grande LNG’s property at the port to the port’s turning basin.

Phase one, which hinges on Rio Grande LNG’s parent company NextDecade making a Final Investment Decision ("FID") to build at the port, would involve deepening the channel from the western boundary of the LNG facility lease to the Gulf of Mexico. Per an agreement with the Brownsville Navigation District signed in 2019, NextDecade has committed to paying the entire cost of phase-one deepening, contingent on the FID.

Campirano, who spoke by phone from Washington D.C., said the port has been trying to secure the funds for the deepening project for “well over 15 years.”

The project will require close collaboration with the U.S. Army Corps of Engineers as well as a contribution from the port as the non-federal sponsor — details that still need to be worked out, he said, while adding that none of it diminishes the importance of Tuesday’s announcement.

“This is the furthest we’ve ever been and it’s just one step closer to realizing the project in a big way,” Campirano said. “The elements of the partnership are coming together.”

The project calls for increasing the ship channel’s draft by deepening it to 52 feet from the current 42 feet. Asked why deepening the channel is so important, Campirano said it’s necessary to ensure “the future of sustainability of the port in terms of future growth.”

For example, the port will soon receive its biggest vessel load of steel ever — more than 70,000 metric tons, Campirano said.