Four-dollar-a-gallon gasoline; a quadrupling of lumber prices over the last two years; bargaining for an automobile above the MSRP - rather than below it; and grocery bills that have skyrocketed in the last several months certainly gives one pause as to the value of the coveted greenback. Perhaps this is simply fallout from the unprecedented supply disruptions due to COVID or a mere aberration driven by $100-plus-a-barrel oil and Putin’s invasion of one of the world’s most fertile breadbaskets – Ukraine.

Perhaps. Then again, the nation’s M2 (i.e., money supply) has increased by nearly 13% in the last year to almost 22 trillion dollars. Such a marked increase without a concomitant gain in productivity inevitably erodes the value of the U.S. dollar. The habit of “juicing” the Treasury’s printing press has not done our dollar any favors over the last 50 years given that a dollar in 1972 would now be worth $7.00 in terms of buying power. No wonder it takes more cash to buy less.

A 90% erosion of value in a half century would have been viewed as unfathomable to a Roman citizen of the first century who only faced a 1% inflation rate during the first two hundred years after the birth of Christ. Indeed, the value of a denarius was as fixed as the north star. Whether the denarius’ composition was that of silver or gold, it was a currency to be trusted – at least for a few centuries. Paper money, on the other hand, is a different kettle of fish as it lacks intrinsic value. The citizens of the Weimer Republic were made well aware of the hazards of profligate printing of Marks when in a mere 10 months the cost of a loaf of bread skyrocketed from 250 Marks to 200 trillion! One of the most extreme examples of more currency to purchase fewer goods.

In Texas, the good news is that more cargo is entering its ports than last year. Mind you, the cost of transporting both imports and exports are on the rise – but - one need not fret over bare shelves since the ships keep-a-coming. As the end of the 2022’s first quarter looms, ship arrivals for all ports are up well over 14% year-over-year and inland tow traffic across the Houston Ship Channel has jumped nearly 20%.

Viewed through the month-over-month lens, February’s arrival counts were in negative territory across the board – a not atypical situation. The “F”s of February – fog, freezes, fronts and fewer days places this month at a disadvantage compared to its 31-day neighbors. Thus, best to focus on how the first two months of the current year compare to that of the previous one.

The three ports that are in close proximity to one another – Texas City, Freeport and Galveston – all trailed their prior year’s performance. While Freeport’s year-to-date wane was slightly higher than its two neighboring ports at 3%, it posted the lowest monthly decline. Galveston may have had the smallest ebb in relation to 2021’s first 2 months but it had no equal with respect to its precipitous monthly plunge of over 26%. Texas City’s double-digit monthly percentage malaise was roughly half that of Galveston while its 2022 performance was between that of Galveston and Freeport with 2.5% fewer arrivals.

To the south, the port of Corpus Christi and Brownville logged solid arrival gains over 2021’s numbers. The former is up 9.5% and the latter has logged a 4%- and-change gain. LNG and crude exports played a substantial factor in Corpus Christi’s gains whereas imports of project cargo bolstered Brownsville’s vessel count. 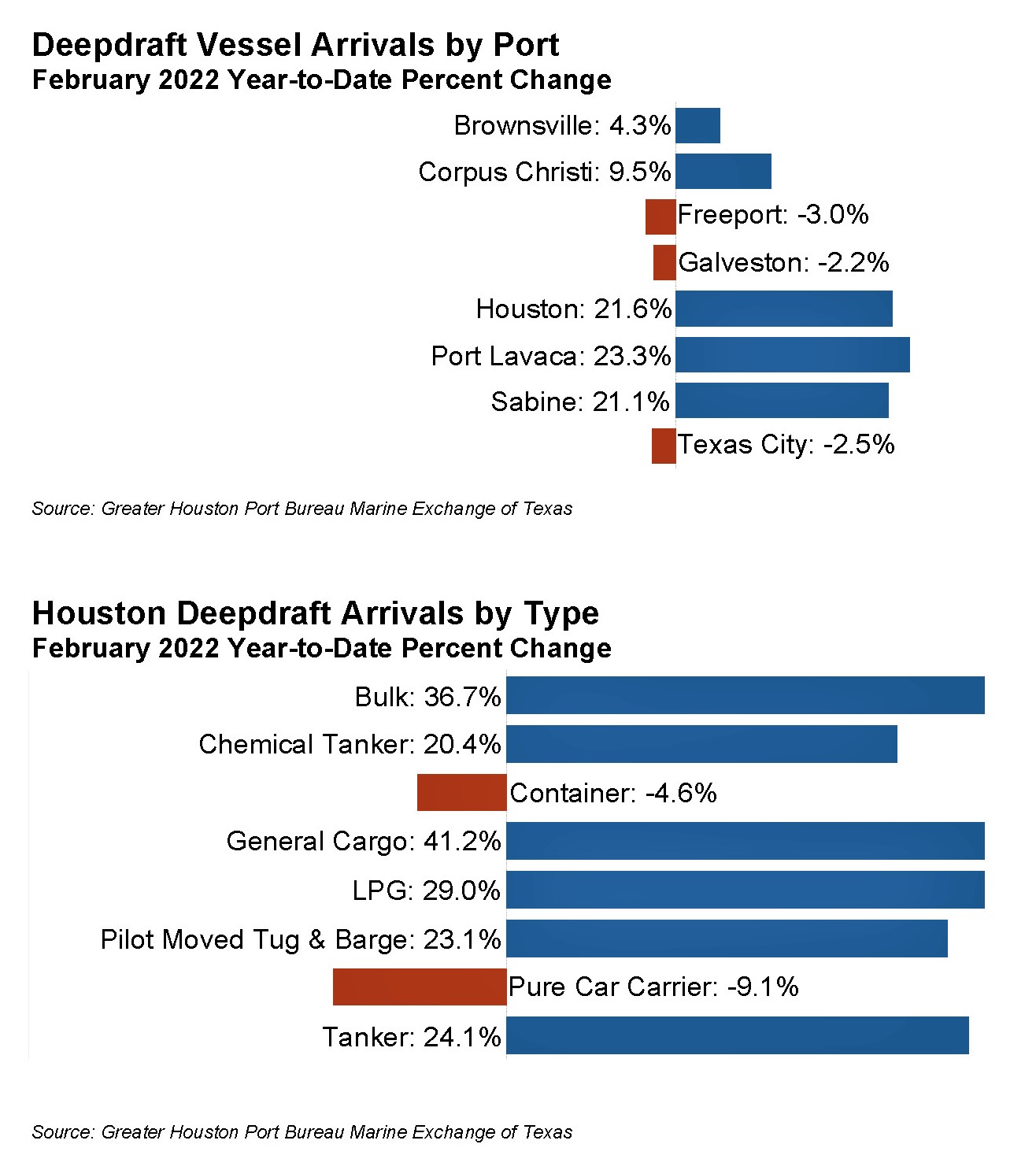 On the opposite end of the Lonestar’s constellation of ports, Sabine’s arrival tally was one of the most impressive of the region. After a relative paltry 5% decease in ship arrivals over the last month, Sabine gained an enormous lead over 2021’s count to the tune of 21%. Like Corpus Christi, LNG and refined product exports dominated the trade picture.

Retracing one’s track line westward to the Houston Ship Channel, the mariner quickly grasps why Houston is the nation’s top tonnage port. 2022 appears to be picking up where the first quarter of 2020 ceased. Today, it may cost a consumer more denarii to acquire foreign-fabricated merchandise. Yet, it takes fewer ships to transport more containers that are brimming with imports. That is, 4.6% fewer container vessels moved 31% more containers in the first two months of 2022 than that of the prior year. The appetite for imports was sated by 33% more inbound containers whereas the world’s demand for exports tailed off by 6% in the first two months of year. Mind you, the overseas yearning for empty containers remains voracious with a year-over-year increase of 218%.

Petrochemical exports from the Bayou City’s waterways were every bit as impressive as that of Sabine and Corpus Christi. On a year-to-date basis, chemical tankers climbed 20%; tankers rose by 24% and LPG exports were up handsomely by 27%. Yet, those paled in comparison to General Cargo and Bulk carrier arrivals which leapt by 41% and 37% respectively – another indication that construction activity ashore is in overdrive. Speaking of driving, car carrier arrivals are few and far between these days. Little wonder that used cars are demanding such a premium as new imports are entering the port by dribs and drabs. Undoubtedly, until the supply of vehicles regains its pre-COVID numbers, it will take far more denarii to purchase a set of wheels than it did two years ago.

It took the violation of the Versailles Treaty by Germany to eventually stabilize its currency after the maniacal printing of the Mark. Conversely, in ancient Rome, it took a plague from the east to compromise the soundness of the denarius. The plague from returning soldiers decimated the population and caused a severe labor shortage. Consequently, laborers could demand far higher wages for their services. Higher wages required more silver and gold coins. Yet, there was not enough precious medal in the Roman Treasury to satisfy the denarius demand. What to do? The Emperor had a brilliant idea, stretch the silver and gold by adding base metals to the coinage. Alas, the 1% inflation of the 100s gave way to 15,000% inflation from 200 to 300 AD and the empire began to crumble. Hopefully, the world’s reserve currency will not mirror the denarius’ tale of woe and end up as valueless as the “Continental” – America’s first paper currency. By the end of the Revolutionary War, no amount of Continentals could purchase a loaf of bread.