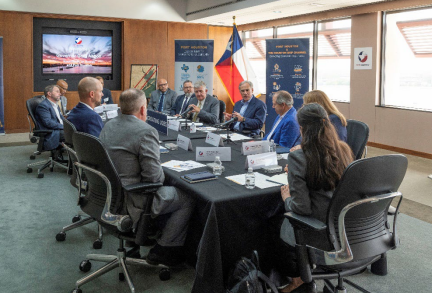 The Houston Ship Channel is home to Port Houston’s container facilities, which handle nearly 70% of all the U.S. Gulf Coast container traffic, as well as the nation’s premier petrochemical complex.

A press conference was held following the meeting, at which Governor Abbott remarked that he was “amazed to learn this port is growing faster in container volume than any of the other major U.S. ports.”

Texas continues to rank as the #1 state in the U.S. for exports, with steadily increasing energy and manufacturing cargoes, along with record-level container activity at Port Houston. Port Houston Chairman Campo remarked on the importance of the governor’s visit and meeting with industry leaders to address the critical needs of the Houston Ship Channel. Executive Director Guenther emphasized that “nearly 50% of Texas’ waterborne tonnage comes through the Houston Ship Channel.”

But it is not just a vital asset to Texas – the federal waterway supports more than $800 billion to the United States economy and is a critical link to transporting goods and commerce across the nation. The ongoing work of Project 11, to widen and deepen the nation’s busiest waterway, will allow for safer and more efficient two-way vessel traffic, delivering more goods, cargo, jobs, and economic prosperity for Texas and the region.

Project 11 stands as a historic model for federal, local, and private investment, as the collaboration among Port Houston, the U.S. Army Corps of Engineers, a bipartisan delegation of federal, state, and local officials, and Houston Ship Channel industry members have all contributed to its success.