The celebrated poet, Henry Wadsworth Longfellow, was in deep despair as he rushed to Washington DC to see his critically wounded son Charley in late November 1863. While Longfellow was a vocal Abolitionist, he had forbidden his son to fight. He had already buried his beloved wife Fanny, his “sweet Hesperus”, after she had succumbed from third-degree burns when her dress accidentally caught fire. A tragedy that struck four months after the commencement of the Civil War. Undeterred by his father, in March 1863, the 18-year-old Charley joined the Union Army. As the widowed father of six waited for word on his son’s prognosis, he knew he could not survive the pain of burying his firstborn. Yet, despite the carnage of war and ever-growing rolls of soldiers who had breathed their last, the melodies of the bells rang on as Christmas Day approached.

Longfellow reflected on the irony of the moment; with so much pain and suffering experienced by the nation, those dulcet peals could not begin to soothe the sorrow of a nation torn asunder.

The bells chimed on and would not cease their tunes of hope no matter how dreary the news or forlorn the circumstance. After all, it was hope that undergird America’s freedom. It was hope that conquered Fanny’s heart and brought Charley into this world. It was hope that brought people together to celebrate the miracle of Christmas.

As the Texas maritime picture wrapped up another year, there was also much hope along the Lone Star State’s waterfronts. The final month of 2021 posted a respectable 5.7% rise for the state and ended the year 3% ahead of 2020. Brownwater activity was also up nearly 1%, year-over-year, despite a small monthly decline. Undoubtedly, the end-of-year trade picture was buoyed by an expectation of economic growth locally, regionally, and internationally.

Just as the sun rises in the east, 2021’s good news begins in that same direction. The Port of Sabine took top honors. It was the Texas port with the most impressive percentage gain for the year. December’s arrival count jumped over 16% as the port greeted more arrivals in the final month of the year than any other month. Sabine outpaced 2020’s numbers by 14.8% thanks to a record number of tanker and LPG vessel calls in final quarter.

The Port of Galveston gave Sabine a run for its money. It chalked up its largest monthly gain for year at 35% and ended the year 14.5% ahead of the prior one after logging a record high arrival count in December. Galveston’s rebound was primarily due to cruise ship calls which remain undaunted by a nagging cold and flu season. 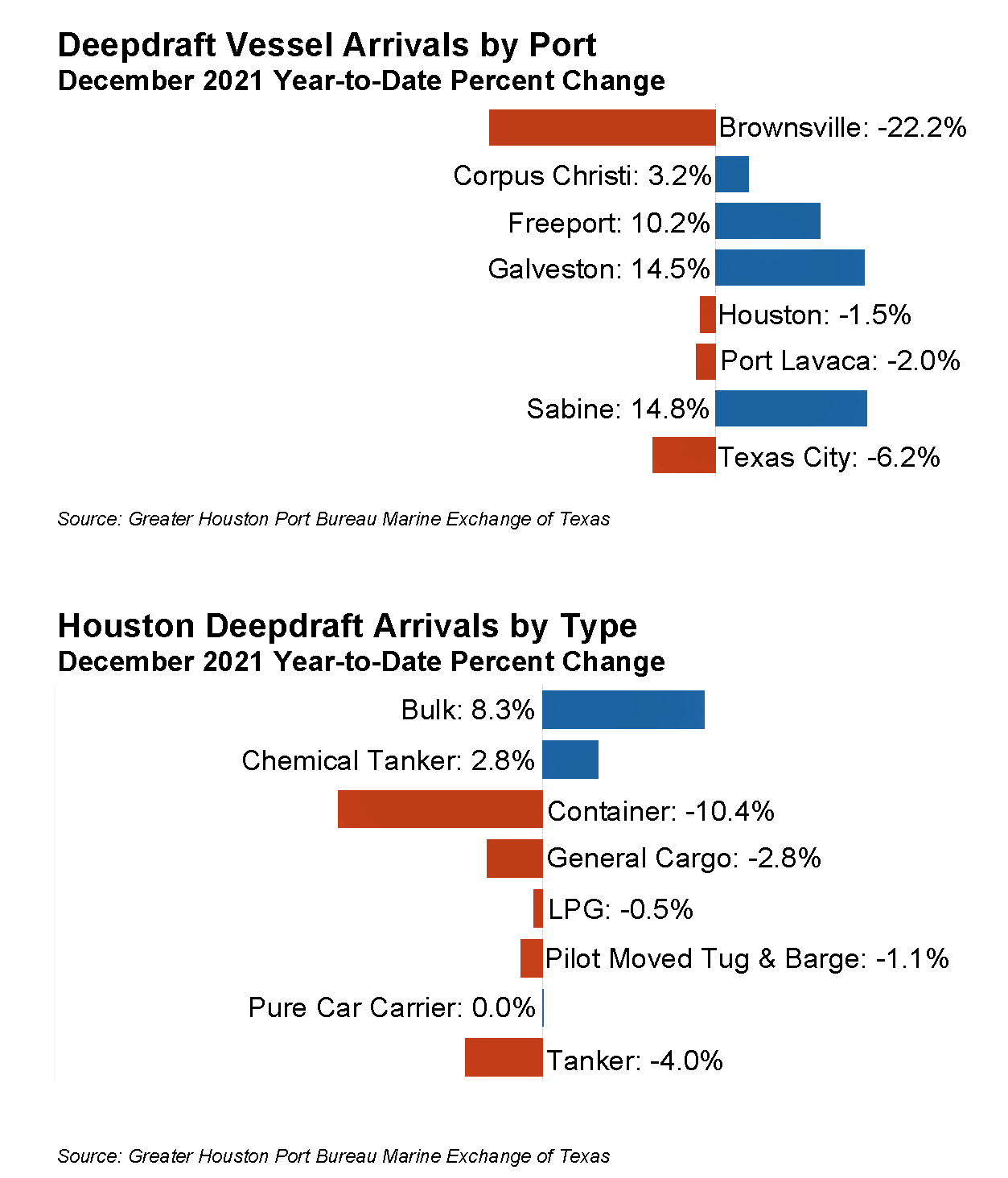 The final double-digit, year-over-year gainer should come as no surprise. Freeport has made a habit of back-to-back 10% ship arrival gains. The port’s final month of the final quarter was roughly 6% higher than the previous month culminating in its tenth triple-digit arrival for the year – another record. Perhaps that should come as no surprise as newly-devoted waterfront acreage is filled with containers and cars as quickly as it is cleared and stabilized.

The Port of Corpus Christi’s final months of 2021 were not enough to push it into 2021’s double-digit gain club; however, it managed to outpace 2020 by 3% after a final monthly uptick of 8%. December was Corpus Christi’s strongest month for the year and signals that the trade trendline will continue a similar glide path into 2022.

Texas’ border port at Brownsville experienced the largest trade slump in the state – percentage-wise – at over 22%; in spite of a 19% monthly jump in December. Texas City, on the other hand, eked out its strongest quarter for the year. Nevertheless, it could not climb out of its trade deficit as the year-over-year arrival statistics remained off by 6%.

In the pre-COVID era, a couple of back-to-back months in the low 700s would have ensured Houston posted a year-over-year gain. Alas, hope springs eternal given that Houston’s 2021 arrivals fell short vis-à-vis 2020 by 1.5% following the most recent monthly wane of 0.6%. There were a few positive notes on the vessel-category front. Bulkers ended the year a healthy 8% above that of the previous year and chemical tankers weathered the pandemic malaise as 2021’s arrival tally outpaced 2020’s by just shy 3%. LPG traffic nearly crept into positive territory for the year after an extraordinarily strong December. Tanker arrivals also had a respectable monthly rise in December but closed out 2021 4% behind that of 2020. Finally, container arrivals pale in comparison to 2020’s figures. Nevertheless, the port is poised to set another TEU record in 2021.

Closing the books on the year can always be bittersweet as one reflects upon unanticipated challenges, goals not accomplished and the dashing of best laid plans. In the world of maritime trade, hoping for the best and planning for the worst may temper one’s expectations; particularly, when forces well beyond the horizon conspire to create shortages or evaporate demand. That said, the joy and marvel of the Christmas season reinforces the importance of treasuring what you possess rather than the desire for what may be empty.

Henry Longfellow, with his visage cloaked in whiskers in order to hide the scars from his attempt to safe his wife, would carry the pain of her tragic passing until his dying days. Regardless of that maudlin memory, what mattered most in late 1863 was the well being of his son Charley. As he prayed and hoped with all his might for his recovery, the tolling of the Christmas bells offered solace and reassurance – for Charley would be well.