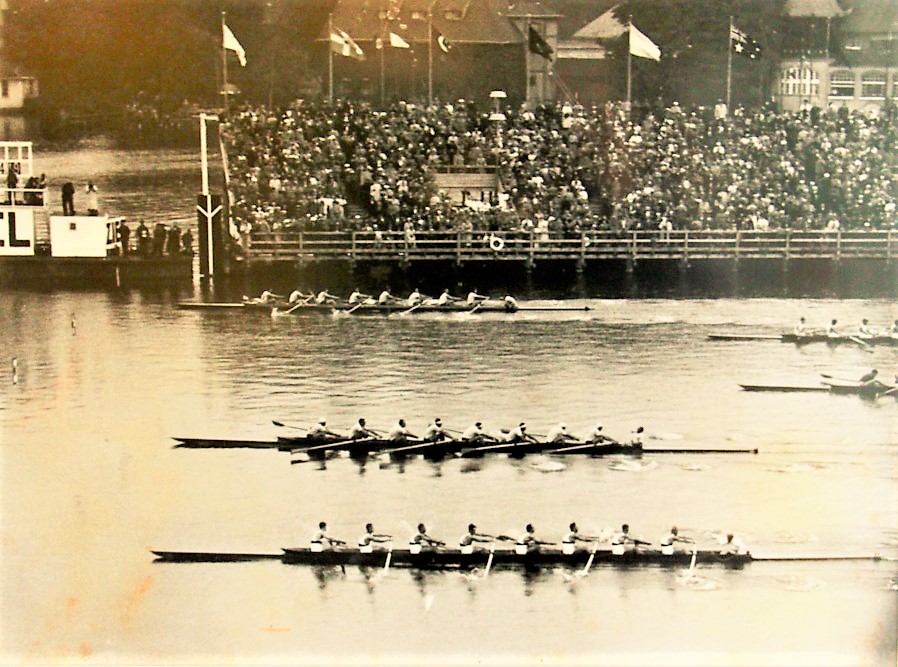 In one of the most widely-covered races in Olympic history, Adolph Hitler could not have been more proud of his German oarsman. The Führer’s rowing teams had already earned five consecutive gold medals on the Langer See – the 1936 Olympic rowing venue in Grunau. Joseph Goebbels – Hitler’s propaganda minister – had assured “His Führer” that German victories in the Berlin Olympics would demonstrate to the world the superiority of the Aryan race. It was a promise that was bearing much fruit as the final and most prestigious rowing event was unfolding before a world audience.

Inexplicably, despite the fact that the University of Washington’s Varsity Eight had set a world record in their qualifying heat, they were positioned in the worst and most exposed lane. Yet, the German oarsman, who posted the slowest time of the six finalists, was positioned in the most sheltered lane and closest to the starting official – a complete reversal of the practice of placing the top-seed team in the most favorable position. Consequently, between the roar of the crowd and white caps that covered the waters of the outermost lanes, the Husky Clipper’s crew was handicapped by a late start. Worse yet, wind-whipped waves forced the coxswain – Bobby Moch - to attack the course at an angle to avoid being set into the adjacent lane. It was a no-win situation engineered by a host that would seek victory at any cost.

As Hitler smugly watched his professionally-trained crew lead the charge to the finish line, his biggest concern was whether his ally’s entry – the Italians – would outsprint the Germans in the last few hundred meters. From all appearances, after battling over 1000 meters of choppy conditions, the Americans were too exhausted to make up lost ground. Yet, Bobby knew his teammates better than they may have known themselves. The Husky crew had overcome the elements to pull into third place with 350 meters to go. Unfortunately, they still trailed the Germans and Italians by a boat length. Moch could see the excruciating pain in the eyes of his oarsmen but, now that his boat had entered sheltered waters, they had a chance. He pushed the stroke rate to 40, thence 42, then still higher to 44, all the while exhorting them at the top of his lungs that only 20 strokes remained until the finish line. It was the race of their life. They were calling upon reserves that none of them knew existed. In the span of less than a second, Germany, Italy and the United States crossed the finish line. Goebbels and Hitler were convinced Germany was victorious. The University of Washington athletes had no idea who won. Finally, the official results were announced for all the world to hear – the Husky Clipper had finished first. Hitler and his retinue departed in disgust.

The Port of Houston retained its number one ranking as the nation’s port that handled the greatest volume of tonnage despite stiff competition from the Port of South Louisiana.  This welcome news was followed by the state logging 2.7% more arrivals in the first month of 2022 versus 2021’s first month. Undoubtedly, welcome news to a pandemic-fatigued economy. Likewise, the momentum in the brownwater arena continued unabated as January’s Houston Ship Channel tow count began the year 10% higher than the prior one and exceeded December’s robust figures by 4/10th of one percent.

There were a few Lone Star ports that began ’22 behind that of ‘21. Texas City saw the greatest decline at over 13% following a monthly drop of nearly 15%. Freeport’s run of triple-digit counts came to a close with 16% fewer arrivals in January 2022 compared to that of January 2021. Corpus Christi welcomed 10% fewer vessels from December to January resulting in a softer opening to 2022 vis-à-vis 2021’s first month to the tune of 5%. In the case of Freeport and Corpus Christi, a less active January was inevitable given the extremely active final months of 2021. 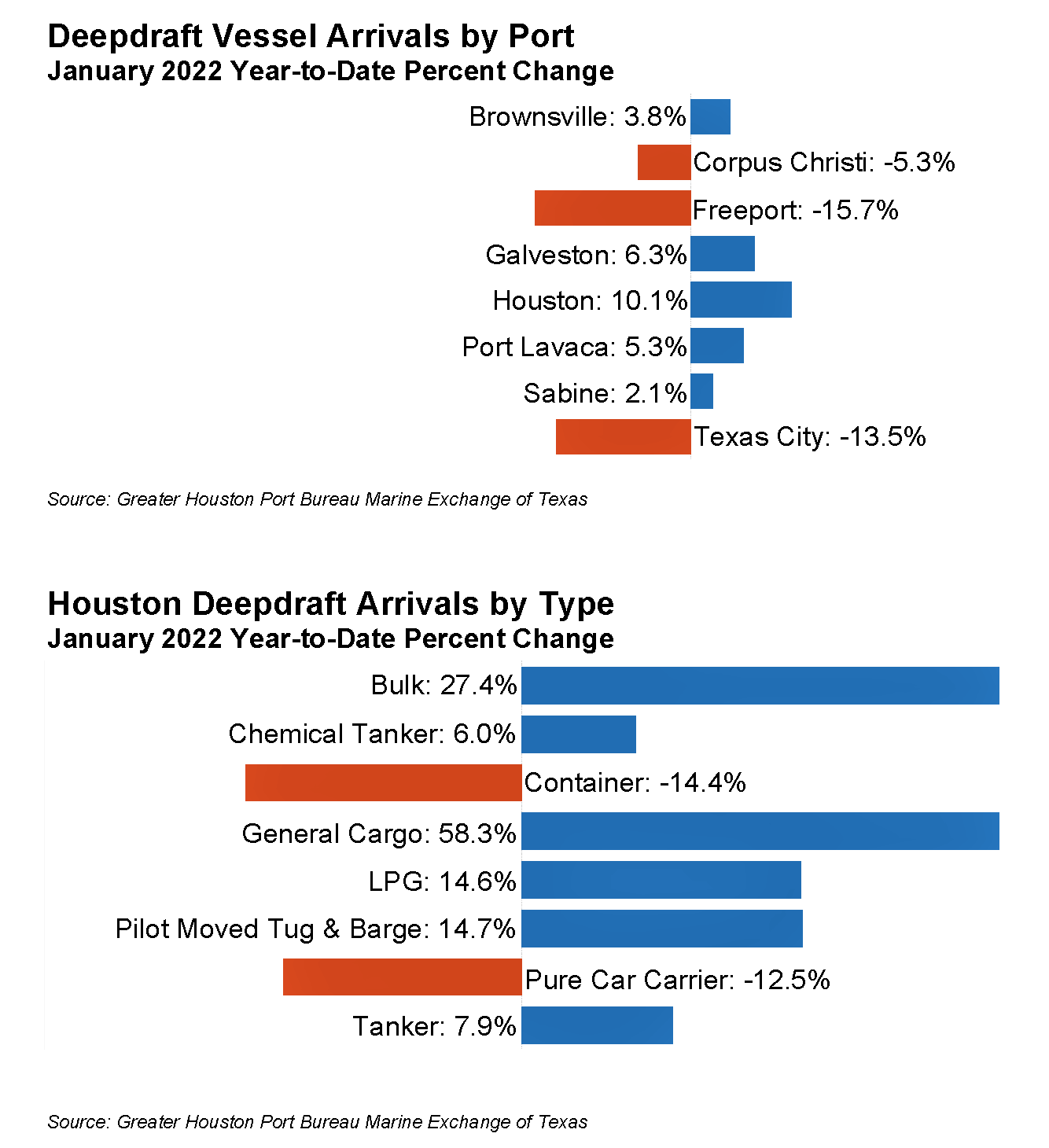 On the plus side of the port ledger, Brownville kicked off 2022 4% higher than its 2021 start. Closer to home, Galveston may have endured a 12% monthly decline; however, it outpaced last year’s opening month by over 6% with the cruise season gaining additional steam. In the border port of Sabine, there was also a double-digit fall in arrivals (i.e., 10%). Nevertheless, there was a 2% uptick year-over-year primarily due to robust LNG, offshore tow and oil tanker movements.

Houston finished the first 31 days of 2022 just two shy of the enviable monthly 700-vessel arrival mark. The impact of that result is a 10% improvement over the inaugural month of 2021 and a 3.4% improvement over December’s arrivals. Every category of vessel - save containers and car carriers -boasted solid gains against January 2021. Bulkers exceeded its previous January by over 27% and the prior month by 16%. General cargo vessels claimed the highest percentage improvement – January-over-January – at 58% and outpaced December by 16%; and LPG arrivals lagged the last month by a mere 4% but kicked off 2022 over 14% higher than that of 2021. Even tankers – a category that suffered much from the precipitous decline in crude during the height of the COVID crisis – began the first month of the year 8% ahead of 2021’s start.

Granted, as evidenced by the first quarter of 2020, a strong start does not necessarily augur a year of plenty. Nonetheless, after nearly two years of economic headwinds driven by quarantines and shutdowns, the desire to live unshackled from fear is reawakening America’s quest to remain as the world’s dominant economy.

The Husky Varsity Eight crew team’s gold medal finish in Germany may have been its greatest victory but it was not their last. The following summer the team travelled from Seattle to Poughkeepsie to compete in their final national championship. After setting a new course record and outdistancing their nearest competitor by four boat lengths, the legendary Jim Ten Eyck - who rowed his first race a few days after the Battle of Gettysburg - offered his opinion on the men who powered the Husky Clipper to yet another championship, “It’s the greatest eight I ever saw, and I never expect to see another like it.” Simply put, they were second to none!