My mom’s side of the family came from Ireland, so to celebrate our 35th wedding anniversaries, my sister, brother, and I and our spouses decided to bike around the western side of the island. My sister and her husband used a tandem bike; my brother and I, regular bikes; and our wives, electric bikes. On our first Irish hill, we realized how smart our wives are.

We were “blessed,” as often said in Ireland, with perfect weather, which means it did not rain while we were there. We thoroughly enjoyed the lush green fields and old-world charm and hospitality of Ireland…along with the pubs. Among the many small towns we visited, I’ll focus on one, Clifden, population 1,600.

We stayed at the Quay House, built for the Harbour Master nearly 200 years ago. The town has a rich maritime history. In the 1800s, the port bustled with outbound agricultural goods and inbound cocoa and rum—a fair trade. In 1905, Guglielmo Marconi built a large wireless telegraph tower and conducted the first transatlantic message. There are no obstructions between the tower location and the receiving station on Cape Breton Island, Nova Scotia. In June 1919, John Alcock and Arthur Brown completed the first non-stop flight across the Atlantic to Clifden in their Vickers-Vimy two-seater bi-plane. They navigated the plane using a sextant, which caused some problem for them, as early in the flight they ran into fog. As they spotted land, they keyed in on Marconi’s tower and saw a suitable green field in which to land. It turned out to be a peat bog, and they ended up nose diving the plane into the dirt. Neither airman was hurt, and they were recognized as heroes, claiming the “first to cross the Atlantic” prize money of 10,000 pounds or $1 million in today’s dollars. 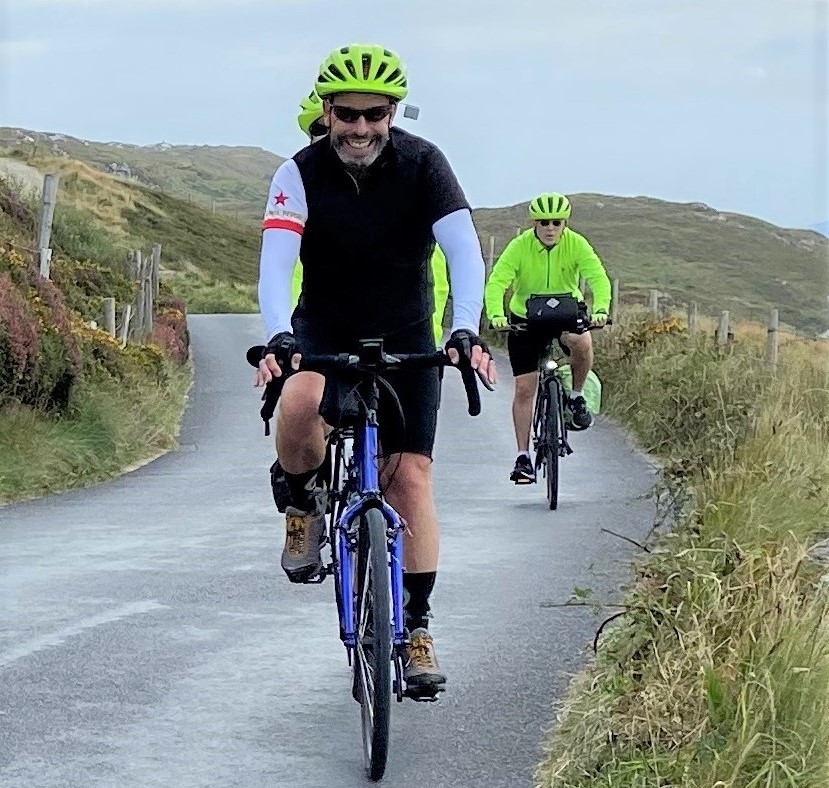 We biked past many of these green fields. The peat bogs caught my attention early on as I saw peat piles along the edges. Peat is dark brown turf, which is harvested, dried as bricks, and used for heating. Our room at Quay House had a fireplace with a peat brick ready to go on the grate. While oil, coal, and natural gas are commonly used around the world, few outside of northern Europe use peat as an energy source.

Decarbonizing is a world-wide agenda item, and very much on the minds of Europeans. Even our taxi driver asked us what America is doing to reduce emissions, even though he likely burns peat in his fireplace, which emits more carbon dioxide than coal. In 2016, peat generated nearly 8% of Ireland’s electricity, but was responsible for 20% of that sector’s carbon emissions.

My wife doesn’t let me talk business on vacations, so I just smiled at the taxi driver knowing I would be drinking Guinness shortly, but I do think there is work to be done on educating populations. Headlines tout the transition to sustainable systems and decarbonizing our future, but the discourse on how to transition is often incomplete. Using renewable energy, such as wind or solar, will help ease emission issues, but it takes time to mature and deploy such technologies at the massive scale required. Some countries may not have the resources required to make such moves for quite a while. Switching to a lower carbon fossil fuel such as the liquefied petroleum gases being exported out of our port and natural gas liquids make a lot of sense in these transition discussions.

LPGs are a versatile energy source that can be used for cooking, heating, and an alternative transportation fuel. Many opportunities exist for solutions using low-carbon energy and technology mixes. The cab driver’s “one-size-fits-all” solution needs to expand into formulas that  bridge from where each of us are now to where we want to be. Factors such as infrastructure, local demands, resources, and economics need to be considered when making energy policy.

It’s a tall order! While we work on it, I do recommend a trip to the beautiful green fields we passed on our biking tour. American visitors to the Irish countryside have been few since the start of the pandemic. I’m sure they’d be pleased to entertain more at the pub – and I’m confident the beauty of the countryside, the friendliness and hospitality of the people, and the strength of their enduring traditions are sure to inspire your best ideas.