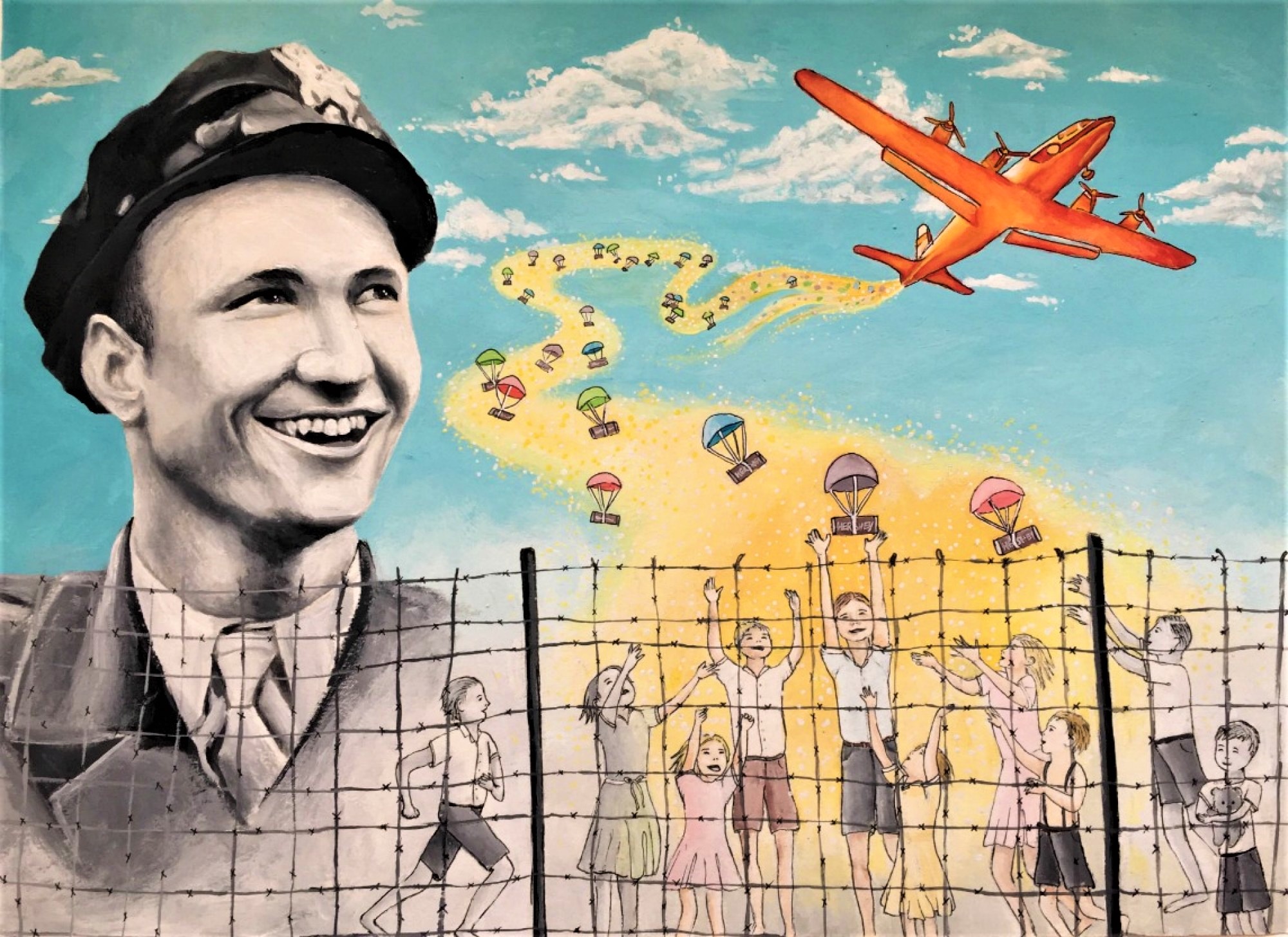 92 million miles of flights were flown by U.S. Air Force pilots as they airlifted nearly 1,800,000 tons of fuel, food and supplies of everything imaginable into West Berlin. It was one of the greatest humanitarian missions in modern history that unfolded as the Cold War began to boil. Indeed, from June 1948 to September 1949, the world appeared to be on the precipice of World War III as an undaunted United States confronted the Soviet blockade of West Berlin. Yet, as an aircraft touched down every 30 seconds in West Berlin, there was one plane that garnered particular attention from the children. A lone C-47 would wiggle its wings as it descended from the sky and dropped hundreds of pounds of candy nearly every day. By the end the of the blockade, the “Berlin Candy Bomber” – CPT Gail Halvorsen, USAF - would drop 23 tons of candy over a field packed with joyful youths. It was an ingenious act of spontaneous kindness that contrasted the optimism of the West to the dark and brooding pessimism of Communism.

Despite, the pessimism that is daily sown by the mass media on any number of issues, the summer trade doldrums of August would not see the light of day in Sam Houston’s old stomping ground. Overall, Texas ports posted their 4th consecutive arrival gain and set a new high count for the year as 2021 finally edged out 2020’s numbers. Better yet, inland tow movements across the Houston Ship Channel also posted a new high with its most recent 0.3% gain. Unfortunately, despite its 6th straight monthly increase, tow movements remain behind last year’s tally by over 4%.

Brownsville led the pack this month with a 25% jump but, its relatively low monthly numbers, tend to skew the 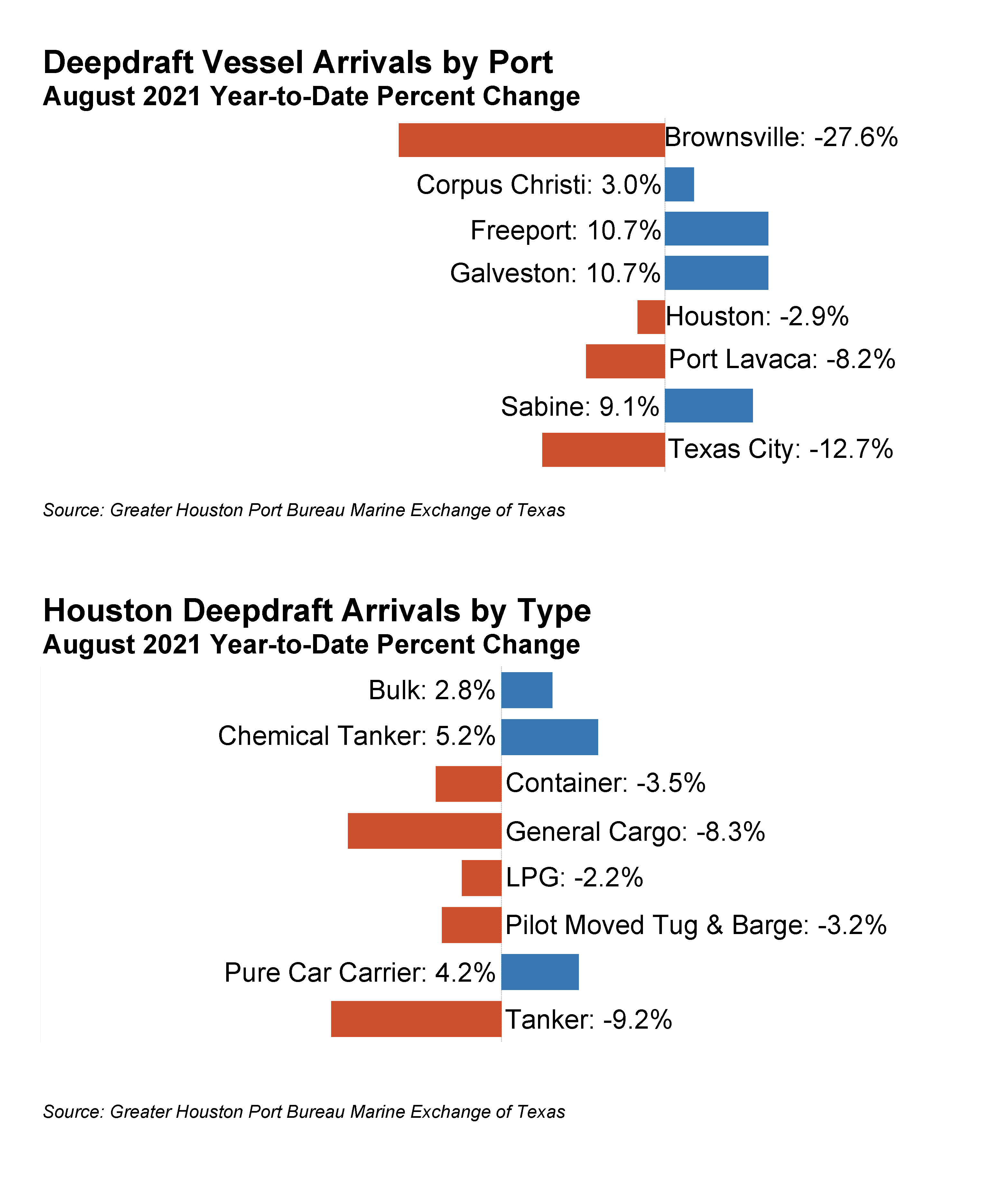 percentages. Regardless, the border port lags 2020’s arrival statistics by nearly 28% - the highest of any port. A few hours north of the rather active border, the port of Corpus Christi enjoyed a busy August with a near-9% monthly increase. Interestingly, while the port remains 3% ahead of its previous year’s performance, its year-over-year advantage has eroded by over a percent in the last month.

As one continues the journey up the coast to Freeport, its monthly performance was the opposite of Corpus Christi as reflected by the near 9% wane. Nonetheless, another triple-digit arrival month has ensured that Freeport continues to solidly outperform last year by well over 10%. Galveston’s year-to-date performance is mirroring that of Freeport which currently stands at 10.7%. Unlike Freeport, Galveston logged an impressive 14.3% monthly jump as it posted its first trip-digit arrival count for the year. The new high was principally attributable to the return of cruise ships – a sight for sore eyes after more than a year of Covid quarantines.

To the north, just inside of Texas City’s signature dike, the port recorded a respectable 12% monthly gain but still remains behind 2020’s arrival pace by nearly 13%. Granted, this is a 3% improvement over the previous month. Sabine, on the other hand is becoming more firmly entrenched in positive territory as compared to last year. Incredibly, after the most recent 1% monthly drop it nearly tripled its year-over-year percentage gain from 3.4 to 9.1%. What pray tell is driving that? Three letters – LNG. If one dives into the vessel categories for the port, the LPG/LNG vessel count has doubled in the last year due to the ramped-up export from the LNG terminals. The only other vessel category that remains ahead of last year’s arrival is that of Tankers. Thus, the export of BTUs has benefited this port region immensely.

Houston’s August was better than most but not that of July as evidenced by the monthly 1.7% wane. On a positive note, the Port of Houston’s year-to-date arrival deficit decreased from minus 4.2% to 2.9% in the red. The category “darling” for the month was ocean-going barges which logged a new peak for the year with the most recent 20.5% boost in arrivals. Bulk arrivals also set a new high for the year thanks to a 7% uptick; however, unlike its General Cargo cousin which remains off over 8% year-over-year, Bulkers are up nearly 3% vis-à-vis 2020’s count.

For the “C” categories - Car carriers were flat for the month but up 4% for the year. Container ship arrivals continue to trail last year’s arrivals by 3.5%; however, the TEU count remains robust with 16% more containers crossing the docks compared to last year. Chemicals languished over Emperor Augustus’ month but continue to surpass the prior year’s bounty by 5%. The remaining BTU players – Tankers and LPG vessels – fell by 1% and 10% respectively during the course of the last month. Both of these categories also lag 2020’s arrival stats by 9% and 2% respectively. Another indicator that the export of bulk BTUs has yet to regain pre-lockdown levels. Obviously, it will take more than $70/barrel oil to breath more life into the Lonestar’s fracking fields. Nevertheless, it takes energy to produce the goods that Texans are so fond of consuming. Hence, the positive flow of commerce will continue to grow.

When the Berlin Airlifts “Chocolate Bomber” was asked who gave him permission to rain candy on the children of West Berlin, he simply replied, “Nobody”; he was simply keeping a promise to parachute his candy rations to a child. The fulfillment of that promise brought immense hope to a besieged city and conveyed to its citizens that good would prevail over evil. It also underscored the wisdom of a young Air Force pilot’s belief that, “the small things you do, turn into great things.”