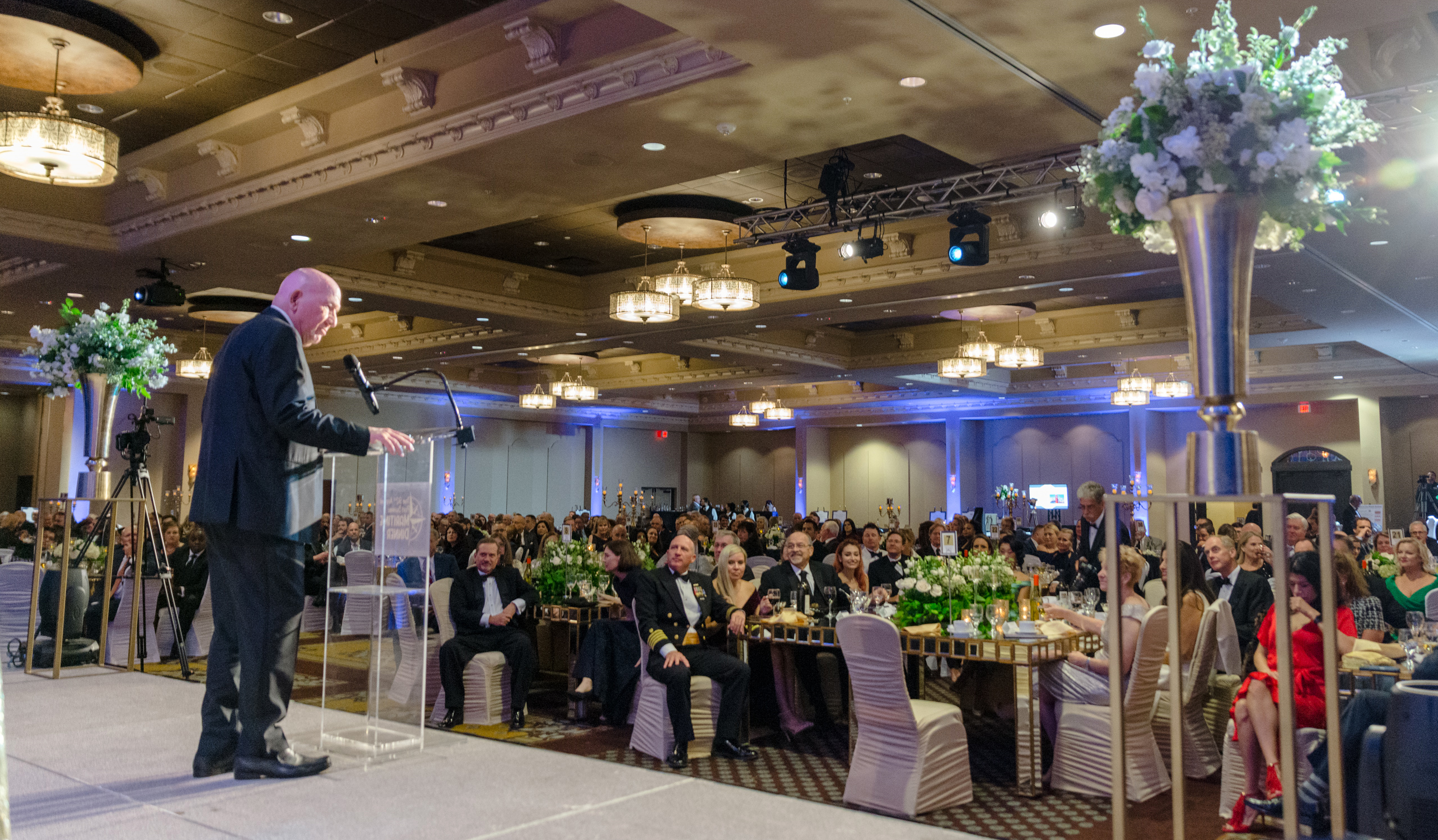 More than 600 guests from Houston’s maritime community arrived at the Bayou City Event Center on the crisp, cool evening of November 5 for the Port Bureau’s 92nd Annual Maritime Dinner. The event honored A.J. “Jim” Teague, CEO of the general partner of Enterprise Products Partners L.P., as the 2021 Maritime Leader of the Year.  Teague was named the 2021 honoree for his outspoken advocacy and financial investment to improve the Houston Ship Channel, and for rallying industry to work together to achieve that goal.

The evening kicked off with a cocktail reception and silent auction. As guests enjoyed the “meet and greet”, the convivial atmosphere was enhanced by music from the Mercury Chamber Orchestra. Following the fine dinner of grilled filet mignon and shrimp ravioli, the recognition program highlighted accolades from industry leaders and public officials.

Frances Castañeda Dyess, president of the Houston East End Chamber of Commerce and representing the City of Houston and Harris County Precinct 2, began the tributes with official proclamations. The Proclamations each noted the importance of Teague’s work in Houston Ship Channel industry and emphasized the importance of the Houston Ship Channel to the region’s economy.

“Houston is the energy capital of the world, and your leadership is helping us and Enterprise Products. Thank you so much keeping the Ship Channel at the forefront of growth, job creation, and prosperity,” said Castañeda Dyess.

Senator John Cornyn and Governor Greg Abbott recognized Teague in specially prepared videos for the event. Both leaders congratulated Teague and thanked him for his contributions.

“Everyone who knows Jim,” stated Cornyn, “knows he’s someone who’s done more than his fair share to help shape Texas’ amazing energy and petrochemical industry. In recent years, he’s done the same for supporting and advocating for the Houston Ship Channel, and Texas is the better for it.”

“Jim, thank you so much for being an outstanding advocate for maritime infrastructure and the expansion of the port of Houston,” said Abbot. “Thanks to your leadership, the port of Houston will continue to grow as an economic engine for the region, which will go on to create even greater opportunities for future generations.”

Keynote speaker Randy Fowler, Co-CEO, general partner of Enterprise Products Partners, shared from their experiences in working together and noting Teague’s consistency in managing risks as a leader and his vision, based on knowledge and experience, for the magnitude of the potential of U.S. shale for natural gas crude and natural gas liquids markets.

“Jim has an unrelenting energy passion and conviction,” Fowler said. “. . . Jim moves needles – whether it’s at Enterprise, at the industry level, at the state level, or at the national level –  when Jim sees an opportunity or a problem and has conviction around the solution, he will throw his heart, his soul, and his mind at it.”

To honor Teague, Fowler presented a video prepared by the company, highlighting Teague’s personal life, career, and leadership accomplishments at Enterprise Products. The film included reflections and congratulations from Teague’s family and colleagues.

Teague expressed his wholehearted thanks for the evening’s recognition, speaking of his career and experiences with humor and appreciation.

“Will Roders is quoted as saying: Houston dug a ditch and brought the sea to their door,” said Teague. “That ditch was the catalyst that created the fourth largest and most diverse city in the U.S, and that ditch built the world’s largest petrochemical and refining hub. That ditch is why we’re the energy capital of the world. That ditch is why most of us have the lifestyle we have. I wouldn’t trade that ditch for anything or any waters in the world! Thank you so much for this honor.”

To cap off the evening, Teague was presented with a replica of the U.S.S. Constitution by April Bailey, executive vice president of commercial banking for Amegy Bank and chair of the Port Bureau’s dinner committee. The presentation of the ship to each honoree has been a Port Bureau tradition for many years. The Port Bureau is privileged to serve the port region and to honor leaders and companies offering outstanding commitment to Houston’s maritime community. 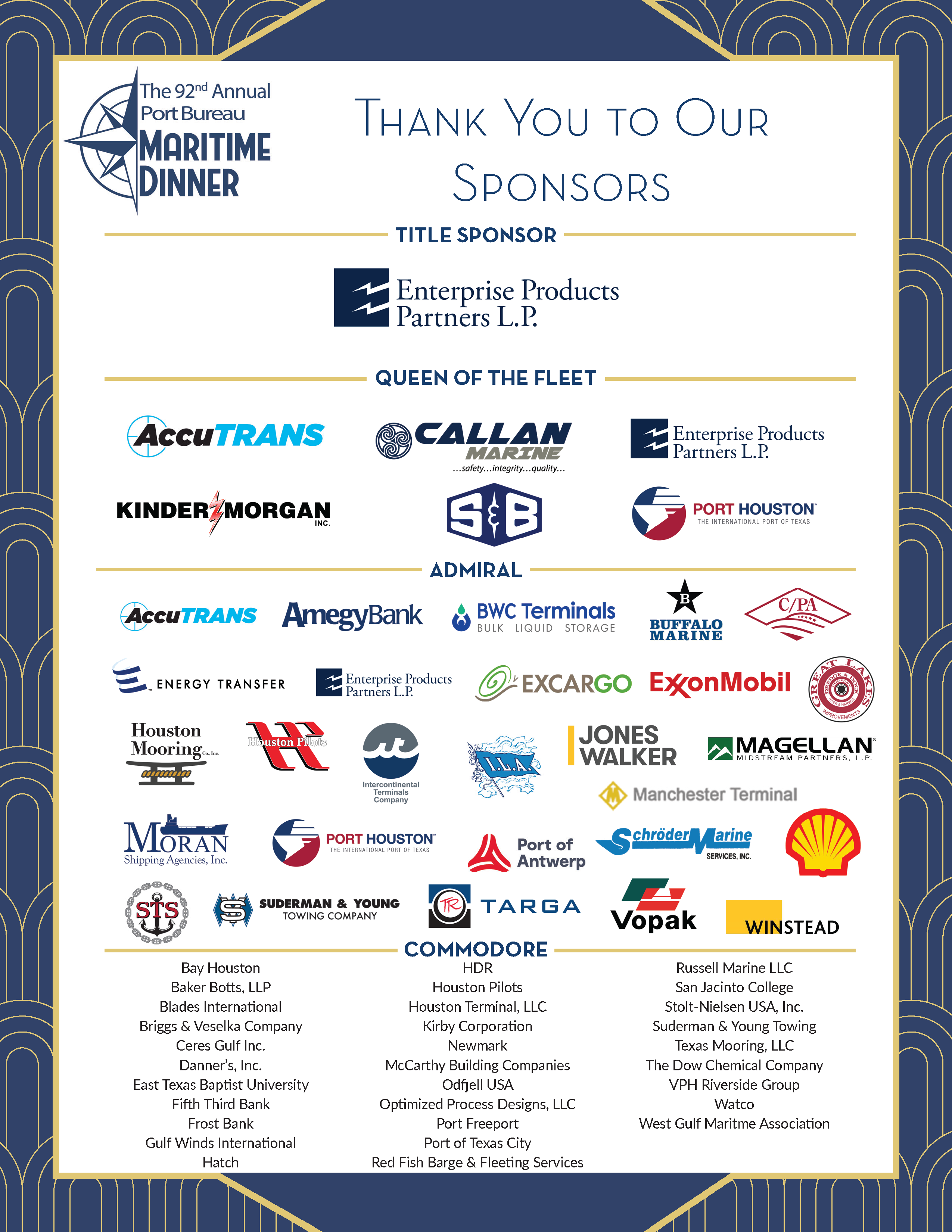 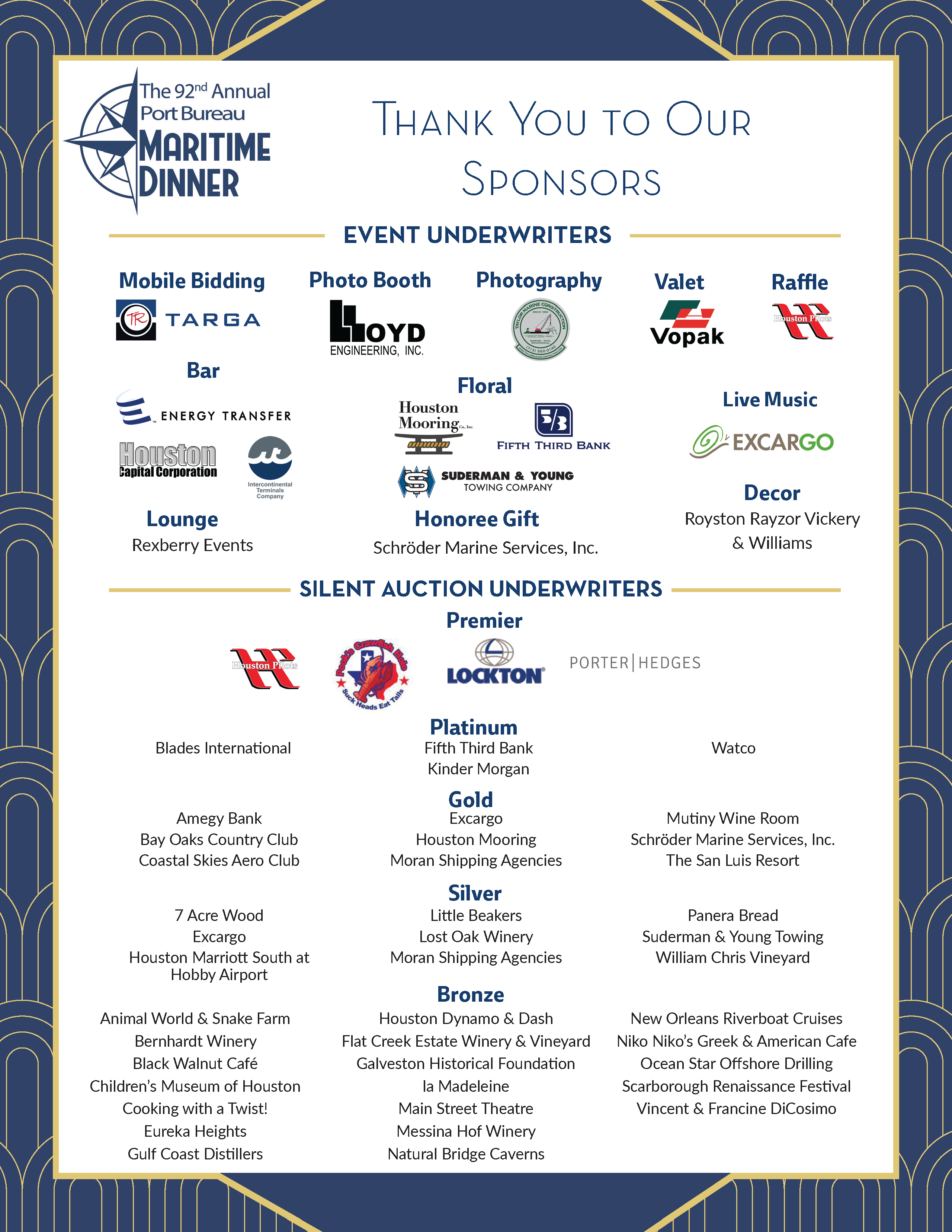