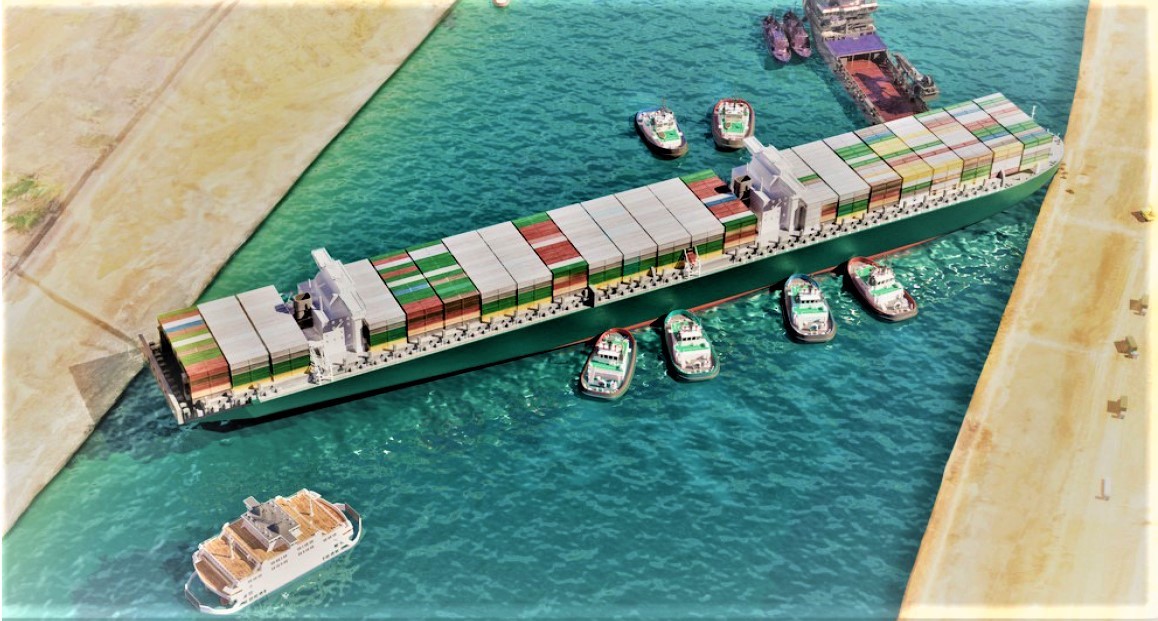 The Ever Given container ship’s troubles at the Suez Canal captured a great deal of public interest recently, giving us a prime opportunity to strengthen the public’s knowledge of the importance of maritime commerce.  It also allowed us to emphasize the value of our waterway and the Panama Canal to the media hungry for a local perspective.

Overall, the reaction highlighted how little consumers know about how goods get to their front doors. Realistically, most people probably have little incentive to think beyond the Amazon truck at the curb, so the grounding gave us an opportunity to highlight the significance of marine supply chains and how their sneakers, socks, and shirts are coming to them via ships.

Nightly news audiences were surprised to take in the ship’s massive size. The tugs and shoreside earth excavators working to refloat the vessel looked toy-like next to the mammoth vessel.  People wanted to know if and how the incident would impact their Amazon truck.  For the most part, the large container ships using the Suez Canal are destined for Europe or the northeast cites of the U.S.  Our container ships come via the Panama Canal and are smaller, less than 10,000 twenty-foot equivalent units (TEUs) compared to the Ever Given’s 20,000 TEU, which was en route to Rotterdam. But, blocking a major shipping lane does eventually affect all of us.

The next question on everyone’s mind was: could it happen here and what would the effect be? The answer: yes, and it would have a similar economic impact.  The Suez Canal has 19,000 transits a year and an accident or two per year.  In Houston, we have a similar number of annual movements and on average one or two incidents per year, too.  We have not experienced a ship getting wedged sideways in our channel, but we do see collisions, allisions, and groundings.  When asked by the media if a ship could be stuck sideways in our channel, I replied it was very unlikely.  Our channel sides are mostly clay, and ships slide along or bounce off them.  When the Ever Given “veered” into the side of the Canal, it was engulfed by the sand, sort of like putting your foot into the sand and moving it — your foot sinks into the sand.  To free it, they had to bring in the earth excavators and a suction dredge.

The third question usually jumps to the Panama Canal — could a ship get wedged sideways there?   I think it would be very unlikely.  The Panama Canal is mostly a fresh lake nestled in a rain forest. You get up and down from the lake by locks.  It is a more complicated transit, and the Panama Canal Pilots take actual control of the vessel (the only place in the world—I think). In the Suez, the captain is still responsible.  Wind can play a factor when loading a ship into the locks and result in side-shell damage from hitting the locks, but you’re not going to get sideways in the locks.  Once up into the system, the wind is not much of a factor.  The other tricky part is the Culebra Cut, which is the 8-mile section cut through the mountains because the bottom and sides of the canal are unforgiving rock, which is why they take it slow and require you to take tug assistance in that section.

Circling back to the Ever Given accident, although a ship getting jammed sideways in a channel is unusual, maritime accidents do happen.  There will be an investigation done by the Suez Canal officials to reveal the actual sequence of events that led to the incident and determine what changes need to be made to procedures, training, and the canal itself to prevent it from happening again.  It will say what we know, ships are getting bigger, and we need to change to move them safely.  As people see the consequences of the Ever Given incident, hopefully, they will realize we all need to be working on safety.  We need them to support us in our efforts to avoid incidents here through more pilot training, tugs, channel sensors, and a wider, “safer” canal (Project 11).

To close on an upbeat note, providing information and growing maritime knowledge is a core value to the Port Bureau – one we that we see “ever-growing” as we welcome more new members and look to engage with you at in-person events. From hosting seminars in our training room and our monthly Commerce Club educational luncheons to all our premium reporting options, we are here to help members make business better than “ever” in the port region.