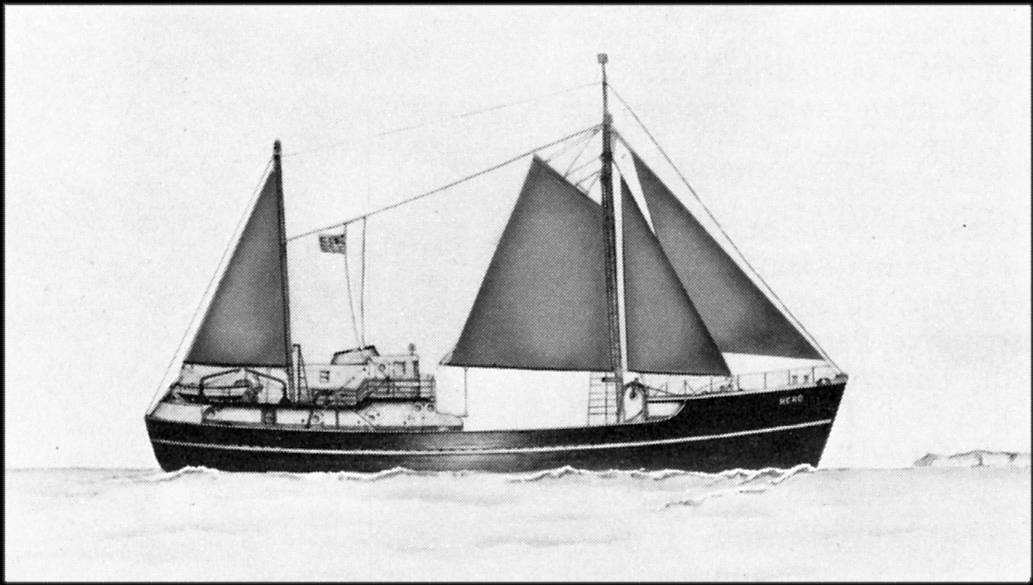 At 21 years of age, he was the youngest ship captain to set sail for the seal rookeries where the Pacific Ocean gives way to the Atlantic. Captain “Nat” Palmer’s 47’ long, single-masted sloop – appropriately named the Hero - was dwarfed by the numerous vessels that hailed from Stonington, Connecticut. Yet, his daring and navigational skills were well known by many as he joined a fleet of seven “Sealers” for the annual journey to the Great Southern Ocean. Unfortunately, for Captain Palmer and his fellow seal hunters, the rookeries south of the Cape of Good Horn were nearly wiped out by previous expeditions. Undaunted, in November 1820, Captain Palmer pressed on to the newly-discovered South Shetland Islands and beyond aboard the Hero capitalizing on its shallow draft of 6’ in order to explore the uncharted islands that stood sentinel before the Antarctic Peninsula that would one day bear his name.

Captain Palmer’s quest for adventure on the high seas did not cease with the end of the profitable sealing throughout the archipelagoes between the South American and Antarctic continents. His years of transiting from New England to the Southern Ocean under sail imbued him with an innate sense of the interaction between ship and sea. He studied the way a hull cut through the waves and the various sail configurations which drove the vessel from crest to trough. His passion eventually led to the refinement of the clipper ship design and the desire for speed. After all, the Panama Canal was not yet conceived and reduced transit times via the Cape of Good Horn maximized the return on Captain Palmer’s investment in these sleek ocean greyhounds. 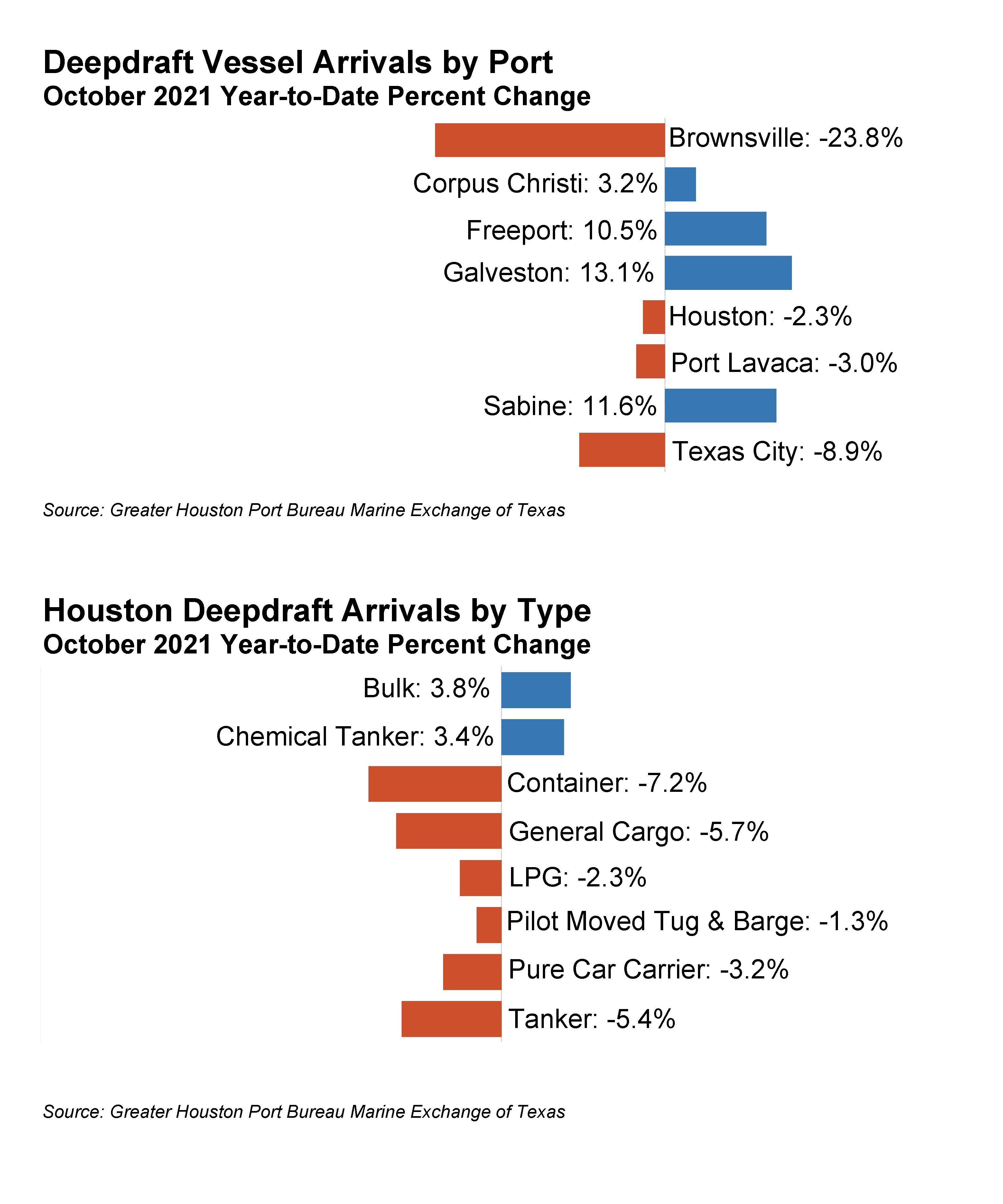 Today, the Panama Canal has served commerce well; perhaps even more so given the current log jam of ships anchored off the nation’s west coast. While a glut of inbound containers bogs down the country’s largest container port, the ports of Texas are kicking off the final quarter of the year in brisk fashion. As always, there were a few exceptions. Galveston’s October arrival count was languid at best with a 21% dive. No matter, the cruise season is full speed ahead and Galveston is still outpacing last year’s arrival numbers by over 13%.

Just as the return of the cruise ship has heralded the end of the era of lockdown in Texas, the demand for readily available BTUs has put a “bounce” in the Port of Sabine’s commercial gait. Admittedly, October was a tad off of September’s arrival total – a mere 0.4% to be more precise; however, the record number of bulkers for the year nearly offset the lowest monthly count for chemical tankers which dropped 17.5%. Nevertheless, nearly every major vessel category registered a handsome improvement for the month. LPG arrivals were up by 15%; tankers climbed by 4%; and even general cargo saw a 150% improvement. Overall, Sabine’s arrival count is up 11.6% year-to-date.

Brownsville matched its prior month’s arrival. Candidly, that is of little solace for a port that lags 2020’s numbers by unenviable 24%. Meanwhile, a hundred-plus miles up the intracoastal waterway, Corpus Christi experienced a 1% bump in the last month and remains over 3% ahead of last year’s arrivals. It may not be the most robust of performances, but consistent single-digit gains underscore the port’s strategy of focusing on sustained and steady growth. Texas City, on the other hand, has waxed and waned by double digits all year. The most recent monthly climb of over 11% boded well for the 4th quarter but – as to the year – it still lags by 9%. As things currently stand, it is unlikely that Texas City will finish ahead of last year’s totals. That said, there is enough activity afoot on its waterfront that signals that the ship will be righted in 2022.

Freeport’s run of triple-digit arrivals continues unabated. It has not seen an arrival count below 100 since April. It’s growth trajectory remains firmly planted in positive territory with the most recent monthly gain of 7%. The port’s current year-to-date pace is outdistancing the prior year by 10.5%. Freeport will undoubtedly set another annual tonnage record in 2021.

The port Jesse Jones built posted its 2nd highest arrival count for the year culminating in a 5% boost for the month. While the port is stubbornly lagging 2020’s arrival haul by a mere 2.3%, the prospect of attracting “overflow” commerce via the Isthmus of Panama - in combination with a heightened demand for crude and its constituents - may be enough to pull the port into the positive side of the ledger by year’s end. Breaking the numbers down by vessel category evidenced some very heartening results. In particular, LPG arrivals leapt nearly 23% for the month with its first trip-digit count as it logged a monthly high for the year. Tankers also posted a monthly high for 2020 with over 200 arrivals. Yet, despite this 11% uptick, over 5% fewer tankers have called upon the port as compared to last year.

Unlike the two aforementioned categories, chemical tankers remain ahead of the previous year’s haul by over 3%. The container ship count may be lagging last year’s by 7% but the TEU records continue to fall each and every month. Of course, the most recent 6.6% monthly rise further bolstered the positive numbers. Bulkers saw a 4% dip for the month. Given that the downward blip came on the heels of a monthly high, this vessel category continues to outperform on a year-to-date basis. On the other hand, the most recent 2% monthly gain for general cargo vessels did little to pull this category out of the red for the year. In the realm of car carriers, the worldwide chip shortage has not done this type of hull any favors. Granted, the ship count is a mere two vessels less than last year. Yet, the number of vehicles disembarking from these vessels in the port pales in comparison to last year. Despite the dearth of cars along the waterfront lots, there is activity aplenty with respect to exporting energy and importing the fruits from those exports.

Long gone are the days when Palmer’s clippers rounded the Cape loaded with goods bound for Asian and Indian ports. His passion for speed and innovative approach to shipping played a major role in “shrinking the world.” By the time he breathed his last on June 21, 1877, steel and steam were replacing sail; the transatlantic cable had been laid; the transcontinental railroad had matured into thousands of miles of rail; and Ferdinand Lesseps was scheming to build a canal across the narrow isthmus of Central America. Irrespective of those advances, cables and rails could not stitch together markets from opposite sides of the ocean. It took seafarers of Palmer’s grit and mettle to deliver more for less across the vast and unpredictable seas.