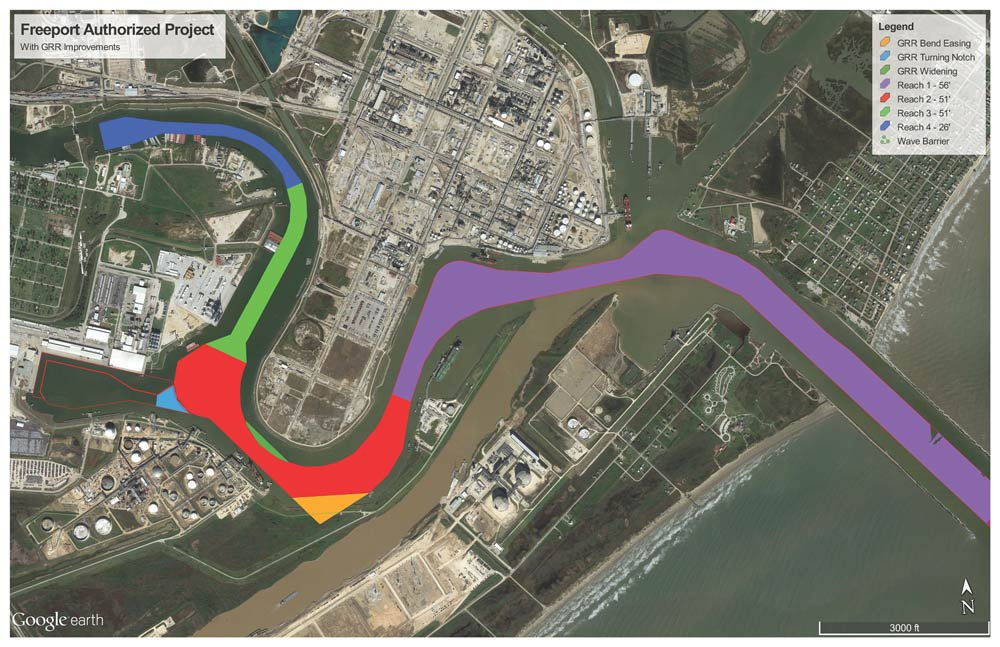 The recently announced U.S. Army Corps of Engineers (“USACE”) Fiscal Year (“FY”) 2022 Work Plan includes $73,156,000 in funding for the Freeport Harbor Channel Improvement Project (“FHCIP”). To date a total of $117 million has been allocated to the Project for construction since receiving a “new start” designation and initial construction funding in FY2020.

“The inclusion of the FHCIP in the 2022 Work Plan is another significant milestone to the construction of the channel deepening and partial widening.” said Phyllis Saathoff, port executive director/CEO. “The partnership that the port has with USACE, our industry partners and the community has been key to our progress.”

The estimated total construction cost of the project is $295 million, of which the federal government share is $165 million, and Port Freeport as the local sponsor is responsible for the remaining $130 million to be funded by the 2018 voter-approved bond package. Engineering and design of the remaining segments is finished, keeping the project on schedule for efficient and timely contract bidding and award.

“The Freeport Harbor Channel delivers significant regional, state and national benefits and is being modernized to continue supporting the safe and efficient movement of commerce on the larger vessels in service today.” said Port Chairman John Hoss. “We recognize and thank Senator Cornyn, Senator Cruz, and Congressman Weber for their continued support for the Freeport Harbor Channel Improvement Project and the stimulus it will provide for economic expansion and diverse job growth for future generations. This channel is the core of our economic engine. It must be maintained, guarded and improved.”

The channel deepening project is a strategic initiative for Port Freeport. The first dredging contract deepened the segment of the Freeport Harbor Channel adjacent to the Port’s Velasco Container Terminal, referred to as Reach 3, to 51 feet making way for larger, deeper-draft vessels to call Port Freeport. A second contract to widen the narrowest section of the Freeport Harbor Channel to 400 feet ("Reach 2 Widening") was completed in April 2022 improving navigation safety for vessels transiting the channel.

"This new funding for the Freeport Harbor Channel Improvement Project is the result of the recognition by Congress and the Administration that there is substantial national interest in supporting the continued economic development of the Texas Coast.” said Col. Timothy R. Vail, District Engineer and Commanding Officer for the U.S. Army Corps of Engineers Galveston District. “We will continue to work together to meet the incredible economic demand for an improved navigation channel in Freeport, while honoring the value proposition the Corps of Engineers has with its partners, the State of Texas and the Nation.”

With the allocation of an additional $73 million in federal funding, the USACE will proceed with the bidding this summer for the construction of another substantial portion of the project. The Freeport Harbor Channel Improvement Project remains on schedule for completion by 2025.