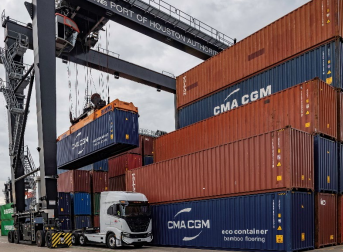 Port Houston recently welcomed its first-ever zero-emissions drayage truck in partnership with Sunburst Truck Lines and Nikola Corporation. The electric truck picked up a container from the Bayport Container Terminal before delivering it to its next destination.

This vehicle was manufactured by Nikola Corporation in Coolidge, Arizona, and uses battery power instead of diesel, eliminating greenhouse gas and other emissions typically associated with combustion engine trucks. Nikola’s new electric truck has a range of up to 350 miles, and it can charge up to 80% in just over an hour and a half. The truck was brought to Port Houston’s public terminal by Sunburst Truck Lines, a family owned and operated intermodal freight handler for the Houston region.

This efficient drayage vehicle is the most recent sustainability action at Port Houston. In April, Port Houston announced its goal to be carbon neutral by 2050. To achieve this, Port officials are promoting clean air strategies including upgrading technology, improving infrastructure and equipment, utilizing alternative fuels and clean energy sources, and increasing collaboration among port users and stakeholders.

“We recently announced a goal for Port Houston’s public terminals to be carbon neutral by 2050. Now, just weeks later we have the arrival of our first zero emissions truck,” said Port Houston Executive Director Roger Guenther. “This is one more step forward on the road to having zero emissions here in Houston and reaching our long-term sustainability goals. We are thrilled to partner with Sunburst Truck Lines on this important initiative.”

“As the first company to test the Nikola battery operated truck in the state of Texas, Sunburst is very excited to power a trip into the future of trucking sustainability. Trucking’s collective future is green, with a zero-carbon footprint. We invite everyone to share an outlook of a cleaner industry, one that will build a stronger America one load at a time,” said Sunburst Truck Lines President and CEO Shaun Leone. Nikola Corporation plans to deploy between 300 and 500 of these zero emissions trucks from its Arizona plant this year.

The transportation industry will play a large role in global decarbonization. Port Houston’s recent Sustainability Action Plan includes an initiative focused on the use of alternative fuel drayage, a move that will require collaboration between manufacturers and operators. Also as part of the plan, Port Houston is working toward eventually eliminating dockside emissions and helping implement green shipping corridors as well as green marine and road fuels.

“Port Houston facilities are just one part of the overall equation,” Guenther said. “Reductions are needed throughout the supply chain, including ships, trucks, tenants, and other operators.” Port Houston reduced its carbon footprint by 55% from 2016 to 2021 and studies showed a 21% reduction in carbon footprint from 2013 to 2019 by Port Houston and the other varied operators who utilize the Channel.