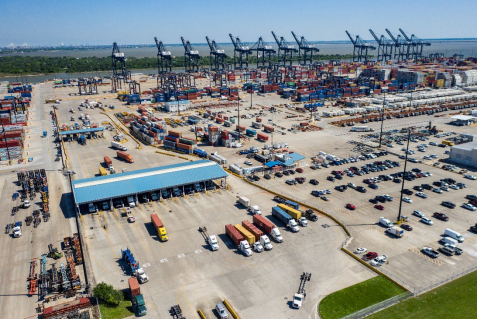 Year-to-date, Port Houston has handled just shy of two million TEUs, specifically 1,897,065 TEUs, an 18% increase compared to 2021. Port Houston owns and operates two container terminals, Barbours Cut and Bayport Container Terminals, though recently containers can also be seen at Port Houston’s general cargo terminals. While still a relatively small number of containers, 106% more container TEUs than last June and 25% more year-to-date moved through the general cargo terminals. This spillover cargo is likely a result of the industry looking for creative solutions to the record rates and disruption in the container market. “

Port Houston is seeing record volumes at our container terminals but also some delays due to the enormous demand,” said Roger Guenther, Port Houston Executive Director. “Just like others in our industry, we are looking for creative solutions to get the cargo where it needs to be as efficiently as possible.

“We don’t expect this surge in containers to slow down anytime soon, and we are actively pursuing multiple initiatives to maintain a fluid, high-velocity environment during this time of incredible demand for containerized cargo,” said Roger Guenther, Port Houston Executive Director. “It’s essential that our customers take advantage of the Saturday hours as well as move long-dwell containers out of the terminals for maximized efficiency.”

Tonnage at Port Houston’s general cargo facilities was up 16% in June and 24% for the first half of the year as compared to last year. Steel imports were up 33% for the month and 102% year-to-date as drilling operations and the demand for Oil Country Tubular Goods (“OCTG”) are up. Auto import units showed an increase of 411% in June, bringing the year-to-date number to just 1% shy of the same time in 2021.

Port Houston continues to invest to meet the future demands of vessels and businesses. Earlier in June, the Port Commission of the Port of Houston Authority approved one of its largest contracts ever, for the next phase of the Houston Ship Channel Expansion – Project 11. This portion of the $1B project was for $450M and covers expansion of a 15-mile portion of the Channel in Galveston Bay and the Bayport Channel and related construction management activities.