As a year of superlatives nears its end, it is apropos that the second-to-last month of the year chalked up another superlative or two. Unfortunately, those results were negative rather than positive. Specifically, the cumulative vessel arrival numbers for the state’s ports were not at their lowest but were lower by more than 7% over the last month. Surprisingly, despite this second-biggest arrival decline for the year, Texas’ overall arrival numbers actually improved from 4.7% in the red to 4.6% off of 2019’s pace. Things were just as quiet on the inland transportation front, as reflected in 9.5% fewer brownwater moves across the Houston Ship Channel over the course of the last month. This particular mode of transportation remains 4.6 behind last year’s count and reflects the malaise that has descended on the tank barge business. 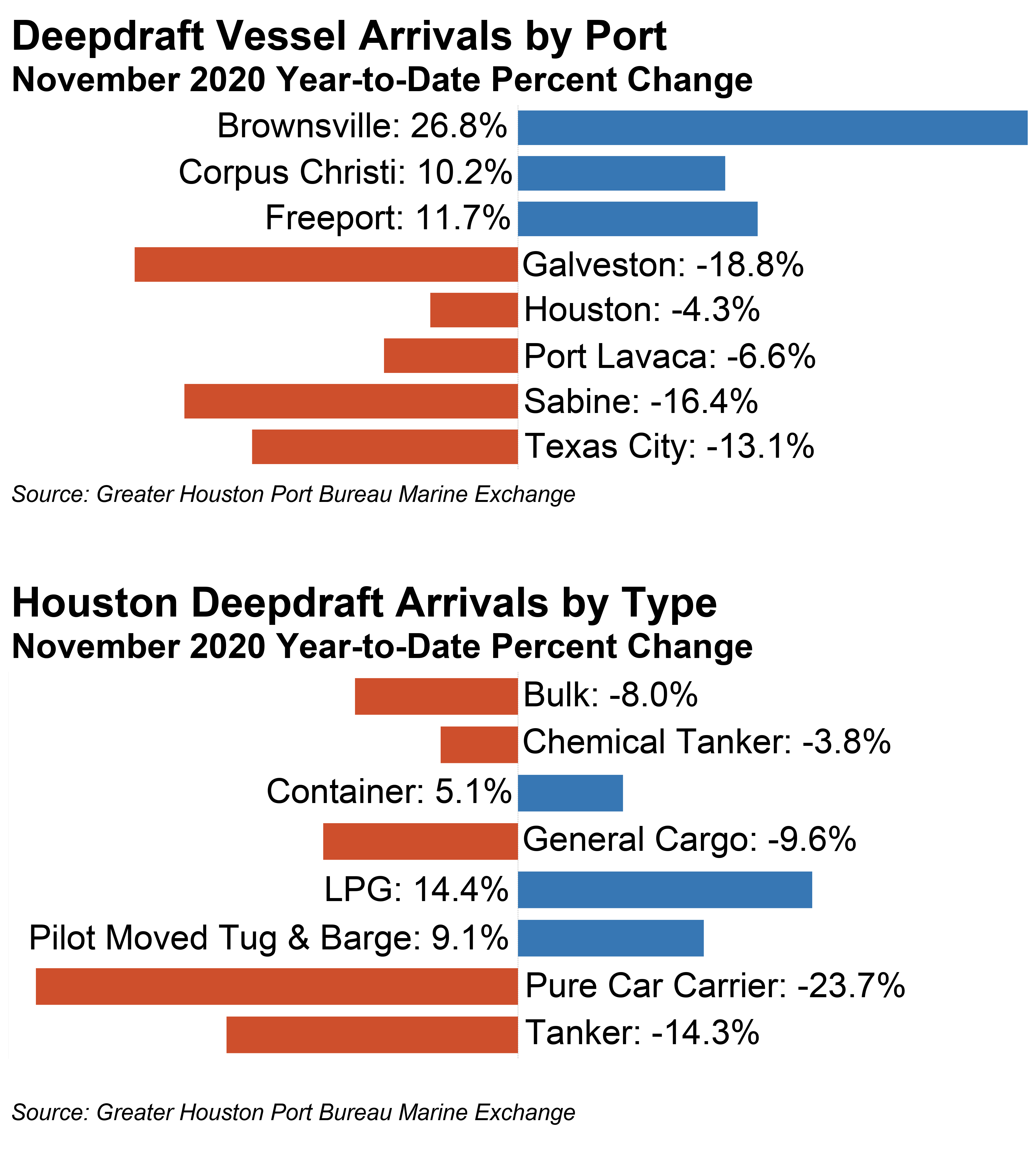 The port of Sabine registered the fewest number of bluewater arrivals this year which translated into a plunge of 19.2% in the last month. Its year-to-date performance is a tad better at minus 13%. Sabine’s historic mainstay has been tankers and chemical tank vessels followed by LPG carriers. While LPG transits have increased over the last year by 2%, chemical tanker arrivals have fallen by 20% for the year, and tankers have fallen further by nearly 22%. Sabine’s monthly performance leads the declines for all of the major Texas ports. Chemical tankers saw the lowest monthly count for the year; vehicle carrier arrivals are nearly half of that of 2019; and tankers, after posting its largest percentage jump in October, headed in the complete opposite direction with 29% fewer arrivals.

Much to its chagrin, Galveston continues to cling to the highest percentage drop for the year at just shy 19%. Its most recent monthly drop of 5% was nowhere near its worst, and the port should take some solace in the fact that its final quarter of the year is leaps and bounds ahead of the previous one. Texas City’s November could have been worse as it saw three fewer deep draft calls in November. It, too, is suffering through 2020’s “export-doldrums” and yearning for those halcyon days when the world could not get their hands on enough Texas crude. Meanwhile, to the southwest, Freeport is thumbing its nose at 2019 and remains a healthy 11.7% ahead of last year’s arrivals despite the most recent monthly stumble of 7%. At present, it is one of three ports that have endured the “viral economy” rather well.

The other two year-to-date-positive ports are Brownsville and Corpus Christi. In November, Brownsville had the distinction of being one of the two ports that logged positive monthly arrival percentages – the other being Port Lavaca. Brownsville’s nearly 27% year-to-date gain is by far the best of all Texas ports and is clearly benefiting from its proximity to Mexico. Corpus Christi joined the bulk of the other ports via its negative monthly numbers of 5.6% fewer arrivals. Yet, with 10% more arrivals through the 11th month of the year, 2020 is poised to enter the record books as the greatest amount of tonnage that has plied its waters.

With one month remaining in a year that many would like to forget, the port of Houston has witnessed only two months where 700 or more bluewater arrivals have navigated its waterways. Needless to say, November was not one of those months, as 6.2% fewer arrivals moored at one of her nearly 200 terminals. Historically, November is a month of declines throughout the Texas marine transportation system. This is evidenced by the fact that - after factoring in the most recent monthly decline - Houston’s year to date performance actually improved from negative 4.9% to 4.3% in the red. In the grand scheme of things this is nothing to crow about, but, illuminating a silver lining is the least one can do when the economic winds are flagging.

On the vessel pedigree front, most categories were to the left of the null point. Tankers managed a 5% upward tick for the month but continue to languish by over 14% for the year. Car carriers posted a respectable gain of two more vessels in November; however, with one month left in the year, 22 fewer vessels have come a calling.  Non-liquid, non-containerized cargos have experienced severe speed bumps this year as seen by the decline in bulk and general cargo vessel arrivals. The latter is off by over 9% and the former by 8%. On the other hand, container vessel movements have held their own in that 5% more container vessels have offloaded cargo in the port. Paradoxically, even though the bulk of the container ships can carry more than in years past, 2020’s total container movements are in dead heat with that of 2019. Full import containers are up by 2% for the year even after factoring in the most recent monthly wane of 9%.  Conversely, the full export container count is 3% behind for the year after November’s 6% climb.

The remaining two export darlings of the port - chemicals and LPG - appear to be at opposite ends of the performance spectrum. Nearly 16% fewer chemical tankers sailed into Houston over the last month leaving the year-to-date numbers almost 4% below break even. LPG monthly stats were 9% below that of October. Fortunately, the global appetite for this particular commodity remains fairly robust given that 14.4% more chemical tankers graced the piers of Houston - a rather impressive showing in these uncertain times.

There have certainly been worse months than November in terms of maritime commerce. There have undoubtedly been more languid years than 2020 with respect to waterborne stream of commerce along the Lone Star State’s shore. Yet, there is one superlative that stands out among all the others: Texas is now home to the port that handles the greatest amount of tonnage in the United States. Indeed, according the 2019 Army Corps of Engineers tonnage statistics, the port of Houston has finally emerged from the shadow of the port of Louisiana and handily exceeded that port’s tonnage numbers. In the grand scheme of things, that is the ultimate trade accomplishment and worthy of many a heady superlative.