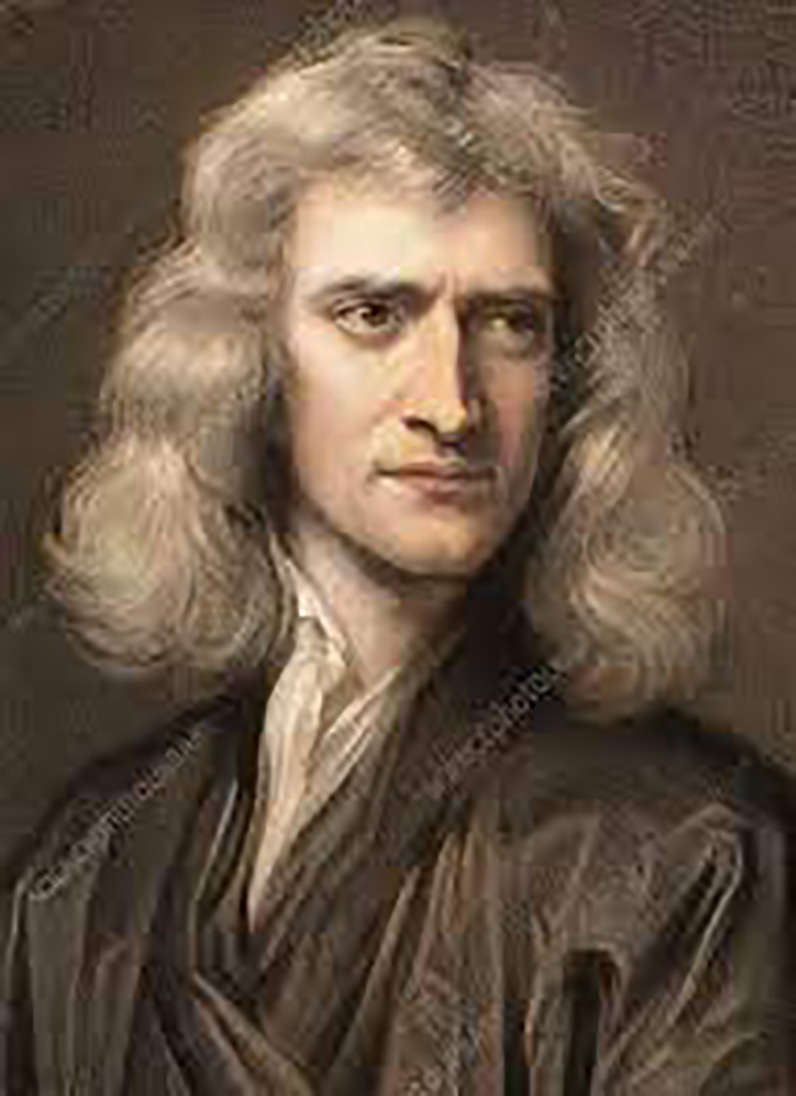 Sir Isaac Newton’s Third Law of Physics posits, “Whenever one object exerts a force on another object, the second object exerts an equal and opposite force on the first.” Every hour of the day one can witness this physics lesson unfold on the Houston Ship Channel as nimble harbor tugs exert a force on a variety of deepdraft vessels calling upon the port. The same is true for the thousands of pushboats that overcome the inertia of fleeted 30,000-barrel tank barges, resulting in the momentum that initiates the movement of bulk commodities throughout the inland waterway system. As many a mariner will attest to, once the inertia is overcome you can’t ignore the momentum.

Speaking of momentum, there was plenty to be found in the ports of Texas during July. The gains of June blossomed into further gains last month. Tow movements across the Houston Ship Channel climbed another 3% as this denizen of the inland waterways registered its fifth consecutive monthly uptick. More is certainly afoot for the brownwater brethren; albeit, the numbers still remain roughly 7% below last year’s bounty.

On the blue water front, aggregate vessel arrivals nailed a threepeat with its highest arrival count for the year. While the year-to-date numbers still trail the previous period by 1%, there are several ports that have joined the “Freeport Club.” That is, they are outpacing 2020’s arrival numbers. Freeport – as expected – chalked up another triple digit month in July and nearly matched January’s peak. It’s most recent 12% monthly increase placed the port squarely in first place with respect to year-over-year percentage rise - which currently stands at 10%. Nearby, the Port of Galveston welcomed one less arrival than the previous month. Yet, despite that meager deficit of 1%, it has rebounded further into positive territory. Galveston’s current 6-plus percentage improvement over 2020’s arrival count has pushed the port into second place in terms of outpacing last year.

Corpus Christi is not far behind Galveston vis-à-vis year-over-year performance which currently stands at 4.3%. However, July was the first month since February where the port failed to attain at least 200 arrivals. It’s most recent 8.5% monthly wane is not completely out of the ordinary since July tends to be a lean month on the maritime commerce front. The final port that has managed to have a rosier 2021 than 2020 is Sabine. July’s arrival tally matched January’s peak. The 2.6% monthly count pulled Sabine solidly into positive territory for the year by well over 3%. The momentum that was in play prior to the economic malaise wrought by a gain-of-function virus has returned as chemical tankers, LPG vessels and tankers ladened with refined petroleum products ply its waterways in ever greater numbers. 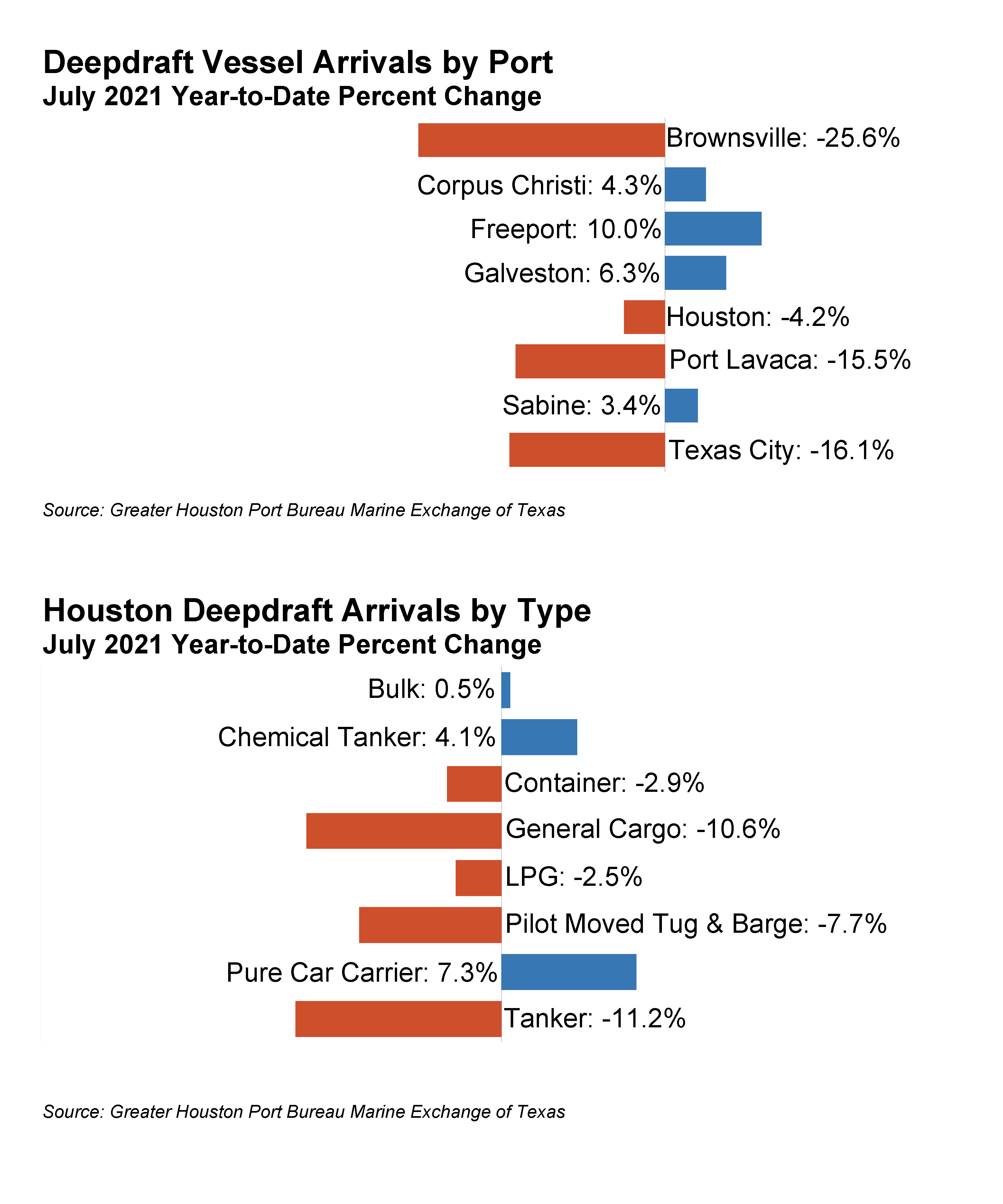 On the opposite end of the constellation of Lone Star State ports, Brownsville has lost the bulk of its forward movement from last year. The 20 vessel arrivals in July was a mere one greater than that of June. Perhaps that is nothing to worry about. That is, until one realizes that the year-over-year numbers lag 2020 by over 25%. Texas City is also well behind last year’s arrival count, to the tune of 16%. July saw a significant dip in vessels calls; however, given that June chalked up the highest vessel count for the year, the near-18% nosedive was somewhat distorted.

It has been quite some time since Houston has seen over 700 deepdraft vessel arrivals over the course of the month. July’s count of 710 eclipsed the previous high set the month before. Thus, after three straight monthly increases, Houston is creeping ever closer to catching 2020’s arrival figures. Not surprisingly, half of the vessel categories that plied the waters of Buffalo Bayou set a new monthly count high. On the BTU front, tankers, chemical tankers, and LPG vessel outdistanced June by 2.7%, 4.1% and 4.3% respectively. Unfortunately, for 2 of the 3 categories, only chemical tankers remain ahead of last year’s count. Bulkers had a rather impressive month with a 23% jump, pulling the category ever-so-slightly into positive territory for the year (i.e., 0.5%).

General cargo took it on the chin during July as 17% fewer vessels moored at Houston’s terminals. This paltry showing pulled the category further into the red for the year. Car carriers held their own for the month by matching June’s activity. Container vessels were off by one arrival for the month and 3% for the year but, as they say, “don’t judge a book by its cover.” Indeed, 15% more TEUs have crossed the docks at Houston’s container terminals in 2021.

In the end, July – a month that typically experiences a trade lull – posted rather robust numbers from Sabine to Freeport. A stark contrast to the previous year when the effects of shuttered economies were being felt across the globe. Ultimately, the force of government mandates sapped the momentum from a booming trade environment. Yet, as Aristotle opined, nature abhors a vacuum. Inexorably, forces will emerge that set the machinery or the “system of things” into motion. Sometimes, it’s simply a matter of reaching stasis while, in other instances, the force takes on a life of its own yielding ever-greater momentum until new forces are brought to bear to curb it. At this juncture, what matters most, is that the traction gained is not suddenly lost. Of course, Newton would be the first to recognize that physics is far more predictable than economics.