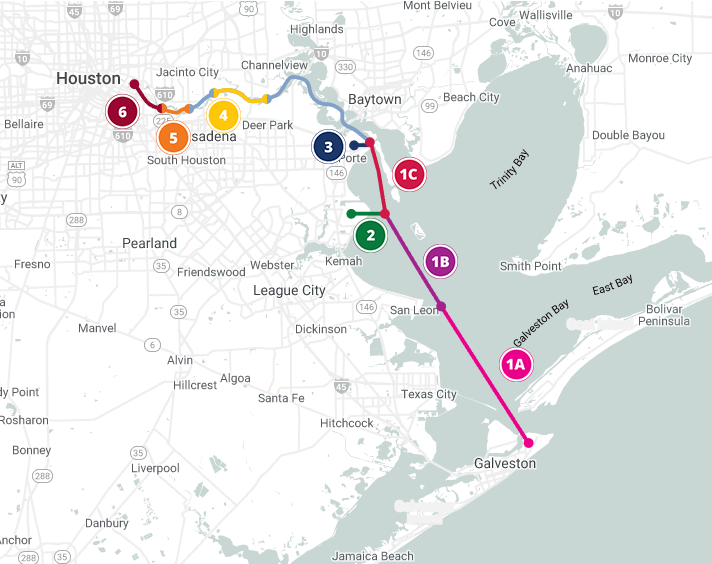 Segment 3 of Project 11 shown above. Image courtesy of Port Houston.

This funding is specifically designated to complete Segment 3 of Project 11, which will focus on the Barbours Cut Container Terminal section of the Houston Ship Channel.

“Thank you to our United States Senators Cruz and Cornyn; our Congressmembers Garcia, Fletcher, Jackson Lee, Green, McCaul, Babin, Weber, Allred, Crenshaw, and Nehls; and to the many Port stakeholders who advocated for this critical investment in the future of our national economy and security,” said Port Houston Commission Chairman Ric Campo. “With this funding, we are one step closer to building a better Port for the next generation of Texans and Americans.” As the only port in Texas to receive construction funding in the IIJA, this represents a milestone win for the Houston Ship Channel and will enable the Port and the USACE to keep the $1 billion Project 11 moving forward.

“This federal funding is essential to keep Project 11 on track and bring to fruition a safer, faster, and cleaner ship channel for all users,” said Port Houston Executive Director Roger Guenter. “This investment and continued partnership with the USACE will enable our ship channel to keep leading the way in supply chain efficiencies and meet the demands of new markets and supply chains. Thank you to all those involved in bringing these funds back to Houston.”

“The Houston Ship Channel remains the crown jewel of the Texas economy and today’s announcement that the Army Corps will be funding a segment of the project is a victory for our state,” stated U.S. Senator Ted Cruz. “Funding this project will not only help ensure that the port continues to have the necessary capacity to make Texas and the United States the energy leader of the world, but also help address current and future supply chain disruptions.”

“Access to safe and efficient infrastructure is critical as more goods come in and out of Texas ports each day,” said U.S. Senator John Cornyn. “I applaud this announcement and look forward to seeing the positive impact this investment for the Port of Houston will have on commerce.”

Completion of Segment 3 will facilitate handling of larger container vessels at this terminal, a critical step to increasing the efficiency of the nation's logistics infrastructure. US total container volumes surged 8% in 2021 while Port Houston container volumes grew 15% year over year. Segment 3 also connects to the Enterprise Morgan's Point Terminal, a logistics hub that supports the U.S. oil and gas exploration and chemical sectors.

“I am thrilled that the U.S. Army Corps of Engineers will award $142,515,000 from the Infrastructure Investment and Jobs Act to the Port of Houston,” said Congresswoman Lizzie Fletcher. “This investment in the Port of Houston will strengthen our nation’s largest port for waterborne tonnage, providing increased cargo handling efficiency and capacity, allowing for bigger ships and more cargo to pass through the channel, and ensuring the Port of Houston remains a strategic gateway for trade. I was glad to vote for the IIJA to fund critical projects like this one, and I was glad to advocate for this project’s inclusion in this round of funding. This investment will benefit our city, our state, and our country, cementing Houston’s leadership in trade, strengthening our country’s supply chain, and building for our future.”

“This critical funding of $142 million to the Houston Ship Channel is the kind of investment that is needed to build resiliency and capacity for the future of our supply chain”, said Congresswoman Sylvia Garcia. “I am proud that these federal dollars from the bipartisan infrastructure bill are going to spur our local Texas economy and make the busiest cargo waterway in the nation even better. Our ship channel and our port are key to keeping our economy growing and sustaining over 3.2 million jobs across our nation.”

Congressman Al Green responded to the news of this historic funding stating, “As the #1 Port in the nation, the Port of Houston plays an invaluable role in spurring economic growth and making the City of Houston, Harris County, and the United States top contenders in the global market. It allows international goods to flow in and out of our country, generates millions of job opportunities, and brings in billions of dollars in tax revenue annually. I am delighted the Port has been the recipient of over $140 million awarded by the U.S. Army Corp of Engineers as part of their Fiscal Year 2022 Workplan for the Infrastructure and Investment Jobs Act. These funds will allow the Port of Houston and its ship channels to continue handling its freight with maximum efficiency, manage the increasing volume of cargo, and operate with a higher degree of sustainability. I look forward to continue supporting the Port and helping maintain its competitive edge as a leading hub for international trade.”

“After receiving a New Start designation just last year, I am exceedingly proud that the Houston Ship Channel made another huge step forward by securing more than $142 million in the U.S. Army Corps of Engineers FY 2022 Work Plan to complete construction of Segment 3 – Barbours Cut Channel,” responded Congressman Brian Babin. “Funding this construction will make the nation’s most strategic waterway more efficient and will have a great impact on this country’s future economic growth. It has always been a top priority for me to ensure we secure the funds necessary to complete this project, and I am proud of the hard work that has helped push this forward.”

According to the Army Corps press release, key port projects were selected to strengthen the nation’s supply chain and provide significant new economic opportunities nationwide. “We are excited to see the Administration rely on the U.S. Army Corps of Engineers and the Port of Houston to deliver a modern Houston Ship Channel,” said Galveston District Commander Col. Timothy Vail. “This sophisticated coordination between USACE and Port Houston has been successful in delivering this project faster than any other project of its kind for the federal government. The economic, safety, and environmental benefits from this project will guide the future of not only the Houston Ship Channel, but the entire region as well.”

At the end of December, Port Houston was also awarded a federal grant of $18,267,600 by the Maritime Administration of the Department of Transportation ("MARAD") to develop and expand the Port’s Bayport Container Terminal as well. This grant will help create an additional 39 acres of the container yard, building upon the increased capacity of the expanded ship channel to accommodate deeper draft vessels carrying more cargo containers.