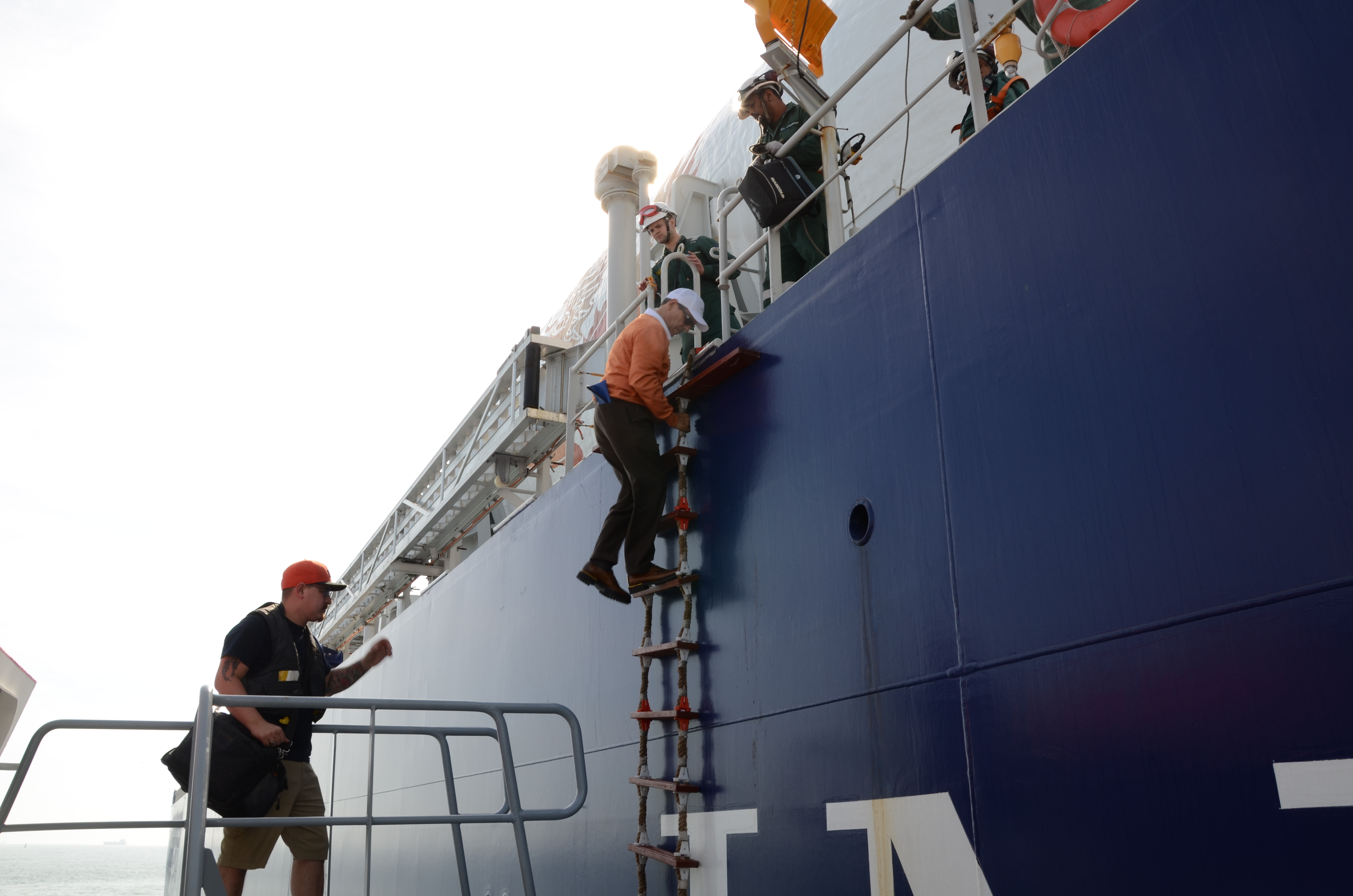 On May 22, 2021, the Houston Pilots (“Pilots”) marked 100 years as the state licensed pilots responsible for protecting the people and environment on the narrowest, busiest commercial waterway in the world. Frequently described as “part art, part science”, the Houston Pilots skillfully perform the job of navigating vessels 24/7, rain or shine, with a commitment to safety first.

While 1921 is the official date for the inception of the Houston Pilots, their history stretches back to 1916, when L. Fred Allien and J. William Laughton receive gubernatorial appointments as pilots for the Port of Houston and Galveston Bar. At that time, Houston Ship Channel water depth was 25 feet from Turning Basin to the Gulf of Mexico. The Port of Houston’s chief commodities? Cotton, rice, and oil. In 1922, Texas produced one-third of the nation’s cotton crop, and, along with Louisiana, 99% of the rice. But oil was booming, and refineries were proliferating along the Houston Ship Channel. Of the 38 privately-owned terminals on the Ship Channel listed in 1923, 18 were refineries or oil-related companies. More were under development. 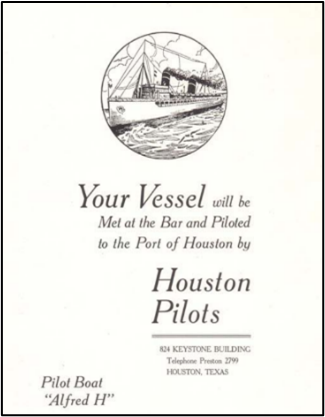 The Houston Pilots advertisement in the 1923 Houston Port Book assures shippers their “vessel will be met at the bar and piloted to the Port of Houston”. The pilot boat was named the Alfred H; their address was 824 Keystone Building, Houston, Texas. The 10-story Keystone building was originally designed by architect Joseph Finger - renowned for his work in Houston’s early iconic architecture, including Houston City Hall - and built in 1922 as a multi-tenant office building. The Pilots can be easily counted as among its first tenants. Located at 1120 Texas Avenue, the building was renovated in 1998 and renamed as Keystone Lofts. A 1400 sq. ft. condo currently lists for $225,000.

From day one, the Houston Pilots assigned unit numbers to identify each new pilot as he or she joined the organization. As of September 2021, the highest unit number is Unit # 251, assigned to Captain Darris Jefferson.

An early Houston Pilot frequently learned the trade by starting as a deck hand and working their way up through experience and additional training.

Today, however, the majority of pilots complete post-secondary education and ten years of seafaring experience before applying to become a Houston Pilot. But the process still echoes that of their forerunners. Once an applicant has been accepted, he or she is appointed as a Deputy Branch Pilot and rides with experienced master Houston Pilots – observing, learning, studying, training – ultimately beginning their piloting with smaller vessels under the watchful eye of the master. Every pilot must be able to draw the whole of the Houston Ship Channel, from memory, complete with its surrounding geographical features to within a millimeter’s accuracy. Safe navigation is instilled into the DNA of each Deputy Pilot.

“The testing process to receive a First Class Pilot endorsement from the U.S. Coast Guard was one of the most demanding and stressful times of my life,” says Captain Chad Prejean, Unit #196, a member of the Houston Pilot Executive Committee.

Once a new pilot completes their terms as deputies and are voted in as full pilots, they become an equal owner of the company. Regardless of their length of service, all pilots are equal in their share of ownership. 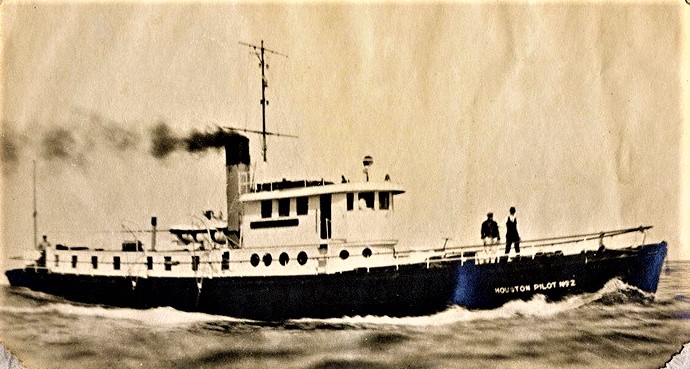 The June 1924 Port Houston Magazine depicts a vessel transit through the Houston Ship Channel through a series of grainy black and white photos, capturing its channel entrance, passing Red Fish Reef and Light, Morgan’s Point, the Lynchburg Ferry, passing another vessel in the channel, moving by the San Jacinto Battle Grounds, and ultimately berthing at Turning Basin. The same issue records 413 vessels transiting the Ship Channel in 1923. Of these, 70 vessels were 28 to 30 ft in draft; 95 were 26 to 28 ft; and 248 were 22 to 26 ft draft.

Ships calling on Houston today vary widely in their types, sizes, and even age, and they represent more than 247+ million tons of cargo transported annually. A transit might take as long as ten hours (not common) or as little as four hours. In the 1990s, the Houston Pilots moved approximately 7300 vessels annually or 20 each day. The “Texas Chicken” may be used by the Houston Pilots to maintain separation between two large vessels, when passing one another in the narrow Houston Ship Channel. Today, moving the number of vessels has nearly tripled, with the Pilots clocking closer to average of 60 vessel transits daily or 18,800 annually. Safe-guarding the community and its environment has never been more imperative – or stressful.

Safely Meeting at the Bar

What goes into meeting a vessel “at the bar” in Galveston? While it may look a little different on the outside, the process itself hasn’t changed much since the first pilots boarded vessels. But no trip is considered routine.

The Houston Pilots utilize two “Bar Boats” – the Bayou City and the Houston. The boats stay on station 24/7 offshore, have sleeping accommodations, restrooms with showers, and messing onboard for pilots to use between assignments. They also serve as a boarding platform for embarking and disembarking pilots to and from deep draft vessels.

The transference between vessels remains one of the most perilous parts of a Houston Pilot’s job. The pilot must utilize the ship’s ladder, frequently a Jacob’s ladder from two to thirty feet, to board a vessel. Matched in speed, both vessels are moving. The pilot must rely on the vessel’s crew to have secured the ladder properly on deck. Pilots board in every kind of weather and ocean current. Injuries during transfer or even death can occur to Pilots during the transfer.

“Houston Pilots have some of the most capable and technologically advanced Pilot boats in the world, but in the end it’s the skill of the Pilot boat operator to safely maneuver alongside a moving ship in bad weather that is the difference between a Pilot getting safely onboard and disaster,” says Captain Stephen Jewell, Unit #209 and Boatkeeper for the Houston Pilots.

Once aboard, the pilot takes over command at the bridge of the ship. He or she will have her own laptop, with a GPS unit that shows where other vessels are or will soon be. Communication is vital. The pilot gives engine orders, speed, and direction, frequently communicating with other vessels in transit. Two Houston Pilots will team to navigate the newer, more immense ships.

While this crucial communication flow may seem like a given today, it hasn’t always been so. Vessel pilots on the Houston Ship Channel were not able to communicate with one another until the 1960s. This was not a situation unique to Houston, but the norm for every waterway in America. Well-known accidents, including the tragic sinking of the passenger ship Andrea Dora in 1956, caused maritime interests to closely examine bridge-to-bridge communication. Ultimately, this led to the test of Walkie-Talkie radios as a means of communication, and the Houston Pilots implemented radio assistance in 1964.

Safely Riding Out the Storms

Protecting lives and cargoes during hazardous weather conditions is another familiar safety challenge for the Pilots. There is, perhaps, no other navigational duty on the Houston Ship Channel as relentless as moving vessels in/out during preparation for a storm or getting it going again after closures. No one takes chances on the predictability of the Texas Gulf weather. The difficulties and stresses of recent storms such as Hurricanes Harvey, Ike, and even Alicia may be well-known to us. But consider the assistance rendered by the Pilots in Hurricane Carla in 1961.

The National Weather Service records the Category 4 level Hurricane Carla as “the most intense hurricane to make landfall on the Texas coast in the 20th century”. Damages along the coast were catastrophic. The Port of Houston offered safe harbor to all types of vessels during the weather event. At one point, waters rose in the Houston Ship Channel nearly 18 feet. Miraculously, Houston’s inland port sustained little damage and ships were moving again 48 hours later. Helping keep lives and cargo safe was done without bridge-to-bridge communication.

When Hurricane Rita threatened Houston not long after Hurricane Katrina devastated the city of New Orleans in 2005, an estimated two million people evacuated the area. Highways shutdown in a gridlock that lasted almost 24 hours. The nightmarish situation imparted important lessons for everyone, and in the storm seasons that followed, the Houston Pilots introduced emergency helicopter transport for their pilots between Galveston and Houston docks.

When a hurricane has entered or developed in the Gulf, the Houston Pilot Executive Committee begins assessing the vessel traffic currently in port as well as scheduled sailings and forecasted arrivals. The emergency helicopter is placed on “stand by” status with 24 hour availability.

COVID-19 has added new dimensions to safe navigation. Houston Pilots take appropriate measures to ensure they are healthy before boarding any vessel. To mitigate virus transmission threats, the Pilots request protocols, now familiar to us all, be taken prior to boarding and while a pilot is on the bridge including sanitizing high touch areas of the bridge, limiting essential bridge personnel, and social distancing.

The Pilots also endeavor to comply with any reasonable company-specific prevention measure, as long as it does not interfere with navigation safety.  And the vessel’s and Pilot’s efforts have not been in vain, as there have been no documented cases of transmission of pathogen from a ship’s crew to the Pilot, or a Pilot to the ship’s crew.

Until the latter part of the 20th century, going to sea and pilotage was a profession for white males in the U.S. Not many minorities and women were represented on the country’s waterways.  When the Pilots sought to remove bias and bring more diversity to their organization, there were no candidates in the Deputy Pilot pool of applicants. In Alaska, however, Captain Paul Brown heard about the search and made application. In 1983, Captain Paul Brown became the first African-American Houston Pilot. He was the second in the country to fulfill the role. Brown eventually served with distinction as Presiding Officer in 2002-2003.

In May 1994, Captain Holly Cooper and Captain Sherri Hickman became the first women voted into the Houston Pilots. By the 21st century, their ranks reflected more minorities and women. Each have their own unique story to tell and wisdom to pass on. Captain Hickman has even had the unique pleasure of piloting an ATB out to sea while her daughter, Coronado Hickman, a third mate – stood the navigational watch in 2018.

"I cannot tell you how much pride I felt on that bridge wing with my daughter standing by my side taking the controls and following my commands. So professional, even though I'm her mom," says Captain Sherri Hickman of her daughter. 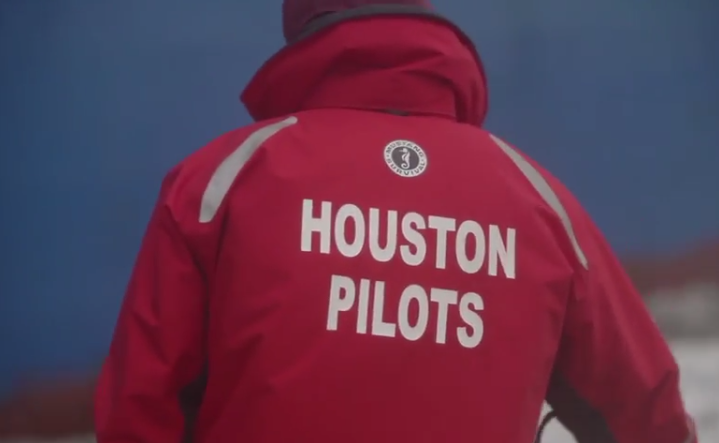 In the ten decades since the Houston Pilots officially took up their navigation role, the Houston Ship Channel has progressed through ten expansion projects – with the eleventh in the making. As they look to the future of bigger ships on a deeper Ship Channel, cargoes will be more valuable and stakes will climb higher. There is one thing about their work, however, that will always remain the same. Safety reigns supreme.

“The Houston Ship Channel and the surrounding area are national economic treasures.  Houston Pilots are honored to have had the duty of safeguarding it for the last hundred years and look forward to standing the watch for next hundred years,” says Captain Robert Thompson.