Long days, short nights, summer swelter, and vacation flights. That’s June for you. The start of the hurricane season and the arrival of Greek-lettered viruses poised to precipitate yet another run on face masks. Fortunately, June was also the harbinger of good news on the navigable waters that wend their way into the Texas ports as there was a flurry of activity that pushed three of the major ports into positive territory for the year.

The port of Corpus Christi squeaked out a new monthly arrival high for 2021 with a 4.4% monthly increase. That was more than enough for the port to exceed 2020’s year-to-date pace by over 4%. Galveston was also in the red vis-à-vis 2020 until the June arrival count was a wrap. After a 6.3% monthly arrival uptick, Galveston broke free of the COVID millstone and managed a 1% year-over-year gain. While the Port of Freeport did not log a monthly increase, its arrival count still hit triple digits despite a 2% wane. Freeport remains in the lead with the highest year-over-year percentage increase which climbed an additional 2% and currently stands at 6.3%. 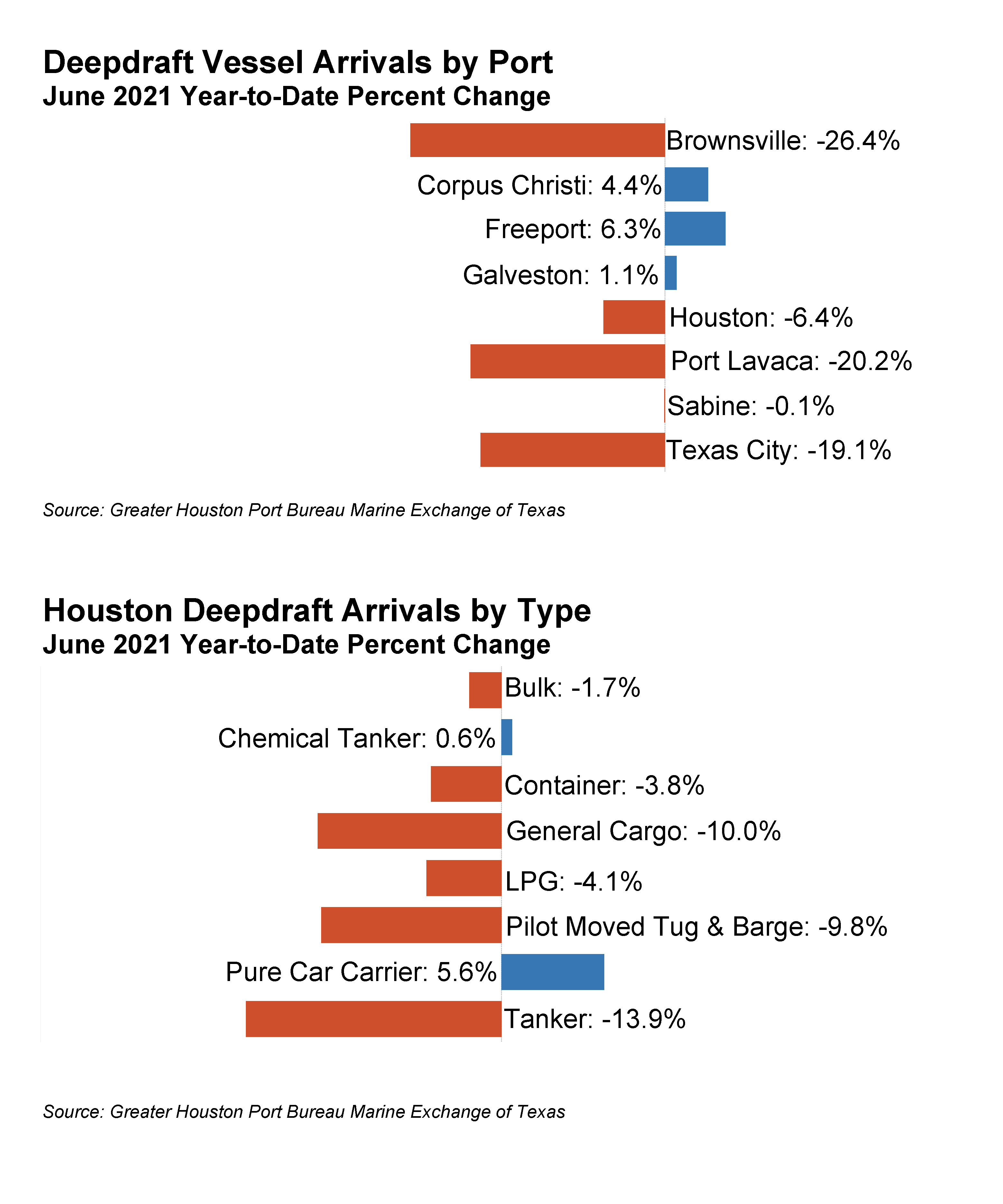 Brownsville suffered its second monthly drop – the most recent was 5%. June’s arrival count was the lowest for the year. Indeed, Brownsville has had better years as it currently holds the largest year-to-date lag of over 26% below 2020’s arrival numbers. Texas City, on the other, hand registered a rather impressive 20% monthly jump replete with a new monthly high arrival figure. The dramatic uptick wasn’t nearly enough to offset the malaise of the last 4 months; however, it knocked off over 7% from its previous year-over-year deficit of 19%.

Just as Texas City benefited from a more expensive barrel of oil, so, too, did Sabine reap a bump in trade as larger volumes of oil flowed through the port. This was particularly evident by the number of tanker arrivals in the port which crushed its previous high as reflected in a 24% jump. Interestingly, general cargo arrivals also posted a monthly high for the year. All in all, the port’s most recent 2% lift in arrivals nearly erased the year-over-year gap. Sabine’s 2021 ship count is merely one below that of 2020’s.

Maritime trade activity to and from the nation’s largest port complex was unusually impressive. It is rare that a summer month’s arrival numbers eclipse that of March or April. June did just that with a tally high for the year, adding an additional 2% monthly gain to that of May’s 10.6% rally. Not surprisingly, June’s bounty could not lift Houston to the positive side of the year-to-date ledger. Nonetheless, it wiped out nearly a third of its deficit which remains at 6.4%. In light of the overall numbers, it stands to reason that most of the vessel categories are off when compared to the prior year.

That said, there are a couple of vessel types that continue to outpace their 2020 numbers. Chemical and cars remain ahead of last year’s count to the tune of less than one percent and 5.6% respectively. While the former is an export play, the latter is most definitely an import one. Another indicium of the import-export trade picture is embedded in the flow of TEUs. After chalking up a 7% rise in the number of container ship arrivals into the Gulf’s largest container port, 2020 is still outperforming the current year by nearly 4%.

In today’s world with larger ships, it is paramount that one focus on the actual number of TEUs landing on the docks. What did that look like in June? Far better than the hull count! The container count was up 2% for the month and remains well above 2020 by 13%. That certainly bodes well for the regional economy. The picture becomes a bit more unsettling - from a trade deficit perspective - when one parses through the TEU numbers. Specifically, for the first 6 months of the year, the full import TEU count is an impressive 32% higher than the prior year while full export TEUs are off 12%. To drive home that even more, one could posit that Houston’s most robust export commodity these days is empty shipping containers which are an unimaginable 239% ahead of 2020’s count. Ultimately, the demand of the consumer on this side of the globe cannot be sated with the current inventory of containers on the other side of the International Date Line.

Not to fear, vessels laden with LPG, crude and refined petroleum products are still aplenty across the Houston Ship Channel. The LPG vessel count tied its March high after an 11% monthly gain. Tankers were only off by 1% over the last month but trail 2020’s count by 14%. Bulkers – up until June – had an edge on 2020’s numbers until its most recent fall of nearly 7%. It now trails last year by roughly 2%. On the tow side of the trade picture, blue water tug and barges saw back-to-back monthly improvements. The most recent one stands at 18%. Juxtaposing this year against the last reveals that many more monthly gains are in order before this tranche of vessels improves upon 2020’s stats. The same can be said about the inland tow numbers which eked out a slight monthly increase. The bright side of the activity is that the tow count has logged four consecutive monthly gains. The reality is that 9% fewer tows have crossed the Houston Ship Channel when compared to last year.

Overall, vessel activity is certainly heating up; along with the waters of the Gulf of Mexico. Mind you, as many an old salt will tell you, the two full months of summer are rarely known for setting trade records on the waterfront. A hurricane or two, the annual trade respite, a maniacal cyberattack or a new strain of virus, for that matter, could quickly derail pent up demand or momentum. Then again, it could be nothing more than everyone departing for summer vacation and laying low until the fall trade frenzy.