The United States will likely take years to return to 2019 levels of energy consumption and carbon dioxide emissions following the impact of COVID-19 on the U.S. economy and global energy sector, according to projections in the U.S. Energy Information Administration’s (“EIA”) Annual Energy Outlook 2021 (“AEO2021”).

Energy market projections are uncertain because many of the events that shape energy markets — as well as future developments in technologies, demographics, and resources — cannot be foreseen with certainty. To illustrate the importance of key assumptions, AEO2021 includes a Reference case and side cases that systematically vary important underlying assumptions.  EIA developed the AEO2021 by using the National Energy Modeling System (NEMS), an integrated model that captures interactions of economic changes and energy supply, demand, and prices.

EIA’s projections in AEO2021 rely on a Reference case that serves as a baseline modeled projection designed to explore varying assumptions about technology, policy, and the economy. The Reference case examines a future in which slower growth in consumption in an increasingly energy-efficient U.S. economy contrasts with increasing energy supply as a result of technological progress in renewable sources, oil, and natural gas. Alternative cases in the report consider variations in economic growth, commodity prices and supply, and technology costs. EIA projections are subject to heightened levels of uncertainty due to the ongoing effects of COVID-19. 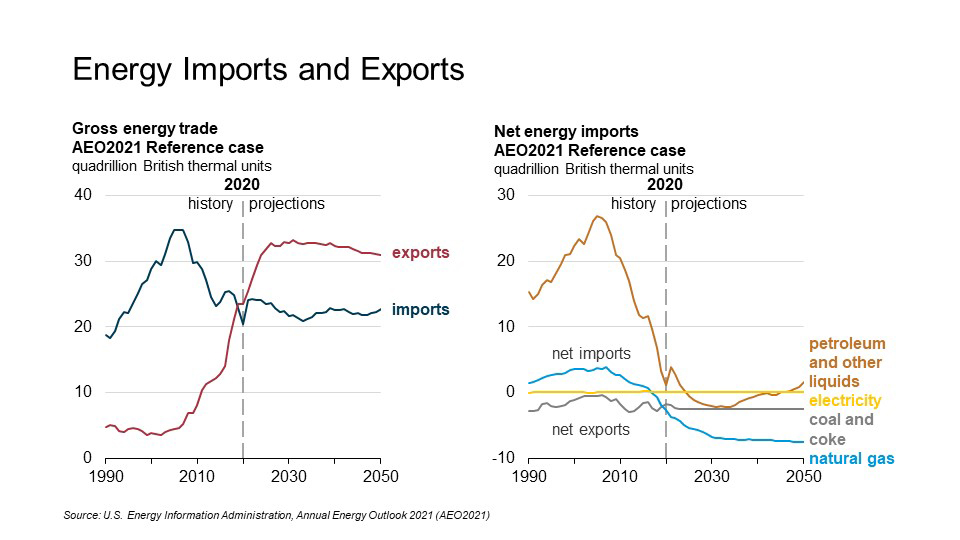 Key takeaways from the Reference case

EIA projects that total U.S. energy consumption will return to 2019 levels by 2029, though that is highly dependent on the pace of U.S. economic recovery. In a case that assumes low economic growth, energy consumption may not return to 2019 levels until 2050. In most cases, EIA projects that U.S. energy-related CO2 emissions will decrease through 2035 before reversing that trend. 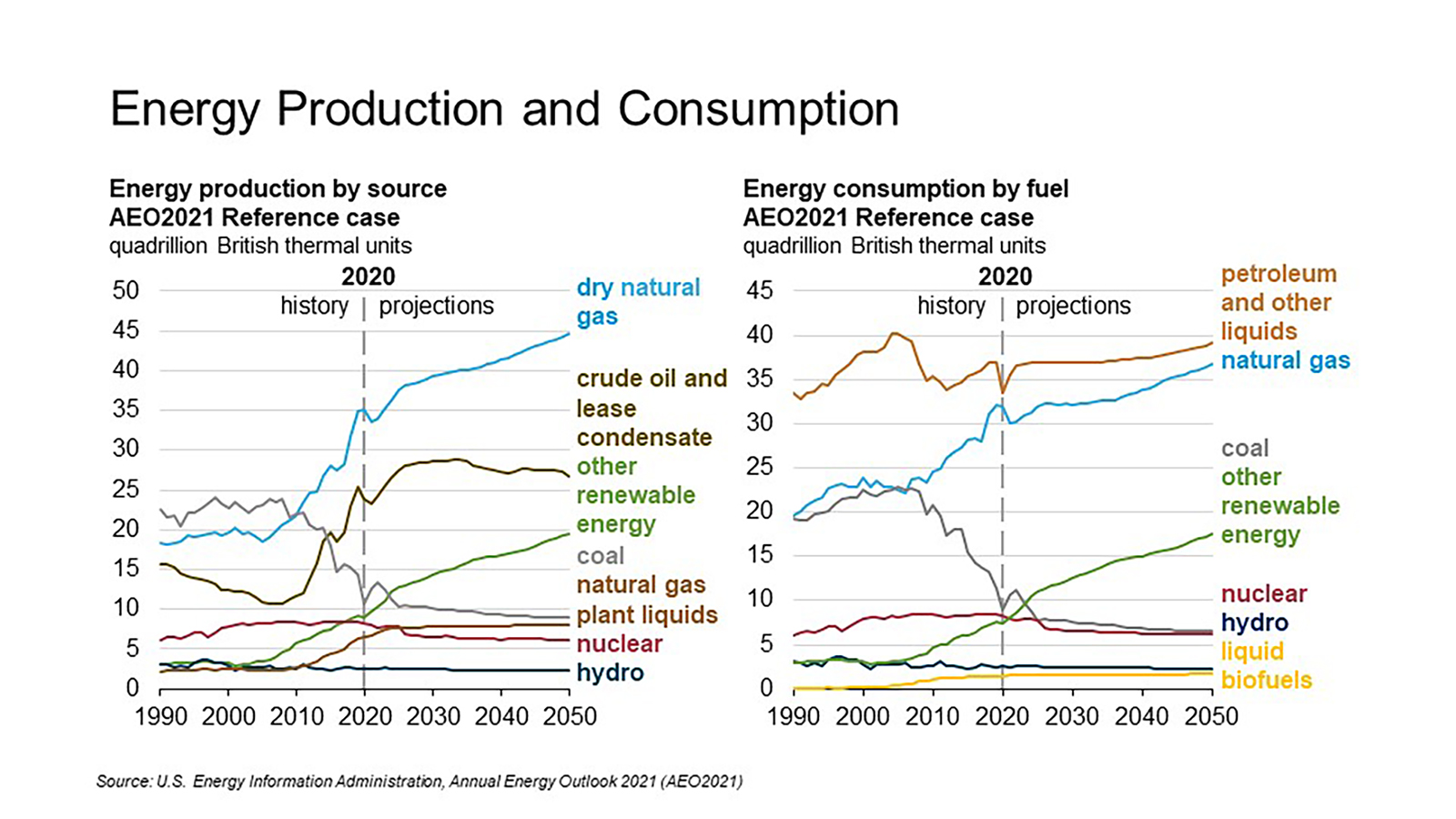 ​Electricity demand grows at a modest rate throughout the projection period.

EIA projects that electricity demand will largely return to 2019 levels by 2025. Renewable electric generating technologies are projected to account for almost 60% of the capacity additions from 2020 to 2050, and EIA projects that renewables’ share of the electricity generation mix will more than double by 2050. The natural gas share will remain relatively flat at 36%, and the coal and nuclear shares will fall by about half, according to baseline projections in AEO2021. 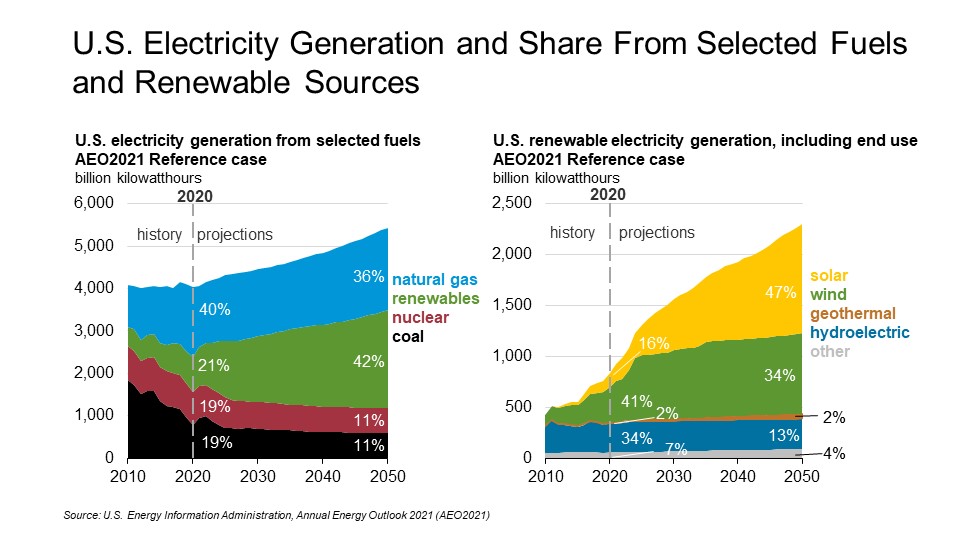 EIA projects that the United States will continue to export more petroleum and other liquids than it imports, but the balance of imports to exports will be highly sensitive to supply, demand, and price factors. High oil and natural gas supply or high oil prices could result in increased domestic production and net exports. If prices or supply remain high, the United States is likely to export more energy than it imports through 2050. 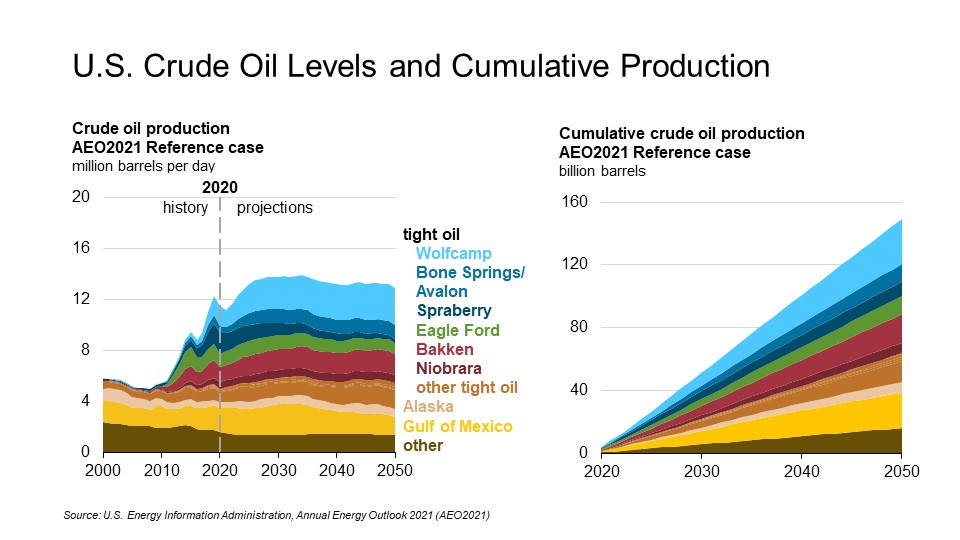 The Annual Energy Outlook 2021 virtual release event with EIA and the Bipartisan Policy Center was held on February 3. The full AEO2021 is posted on the EIA website at eia.gov/outlooks/aeo.