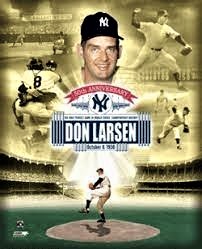 The “Goony Bird” –  pitcher Don Larsen’s nickname bestowed upon him by his Bronx Bomber’s teammates - had much to prove to Casey Stengel. He had lost game 4 of the 1955 World Series against the “Bums from Brooklyn” who went on to defeat the Yankees over 7 games for the Dodger’s first World Series championship. The 1956 World Series, as catcher Yogi Berra would quip, “Was déjà vu all over again”, as the two teams shuttled between Yankee Stadium and Ebbets Field. The aging Dodgers were determined to prove that they were the new dynasty of baseball, whereas Stengel’s Yankees were driven to be the recipient of yet another World Series ring

After blowing a 6 run-lead in game 2 of the 1956 World Series, Stengel gave the nod to Larsen to start game 5. The series was tied at two apiece on that early fall afternoon when Larsen took the mound at Yankee Stadium. The opposing pitcher was “Sal the Barber” Sal Maglie. Larsen and Maglie went “out-for-out” for the first three innings. In the 4th inning, Mickey Mantle, the Yankee’s 11th batter of the game, broke the scoreless tie with a line drive home run – the first of 5 hits that Maglie allowed over the remaining 5 innings. Meanwhile, Larsen settled into a routine of three-up-three-down from one inning into the next. By the end of the 7th inning, Larsen had retired 21 consecutive batters.

The crowd sensed that something historic was unfolding before them when Larsen walked up to the mound at the top of the 8th. Gil Hodges nearly derailed the perfect game with a line drive that was spectacularly caught by third baseman Andy Carey. By the time Larsen faced his 27th batter with 2 outs at the top of the 9th, the crowd was on its feet. Brooklyn decided to send in Dale Miller as a pitch hitter. He was reputed to have one of the best eyes for pitches in the league and rarely struck out. With a 2 ball, 2 strike count, Larsen unleashed his 97th pitch for a strike and landed in the history books as he completed the only perfect game in World Series history. A feat that took 2 hours and 6 minutes.

History is certainly in the making in the port of Houston as a surge in containerized imports and petrochemical exports seeks to recapture that which was lost during the pandemic panic. Yet, before delving into those specifics, it would be helpful to step back and view the “big picture.” Specifically, through the end of the third quarter, the cumulative maritime trade pattern for Texas is fairly robust as it outpaces last year by 6%. The situation is even more positive on the brownwater front given that tow activity across the region is up 14%. 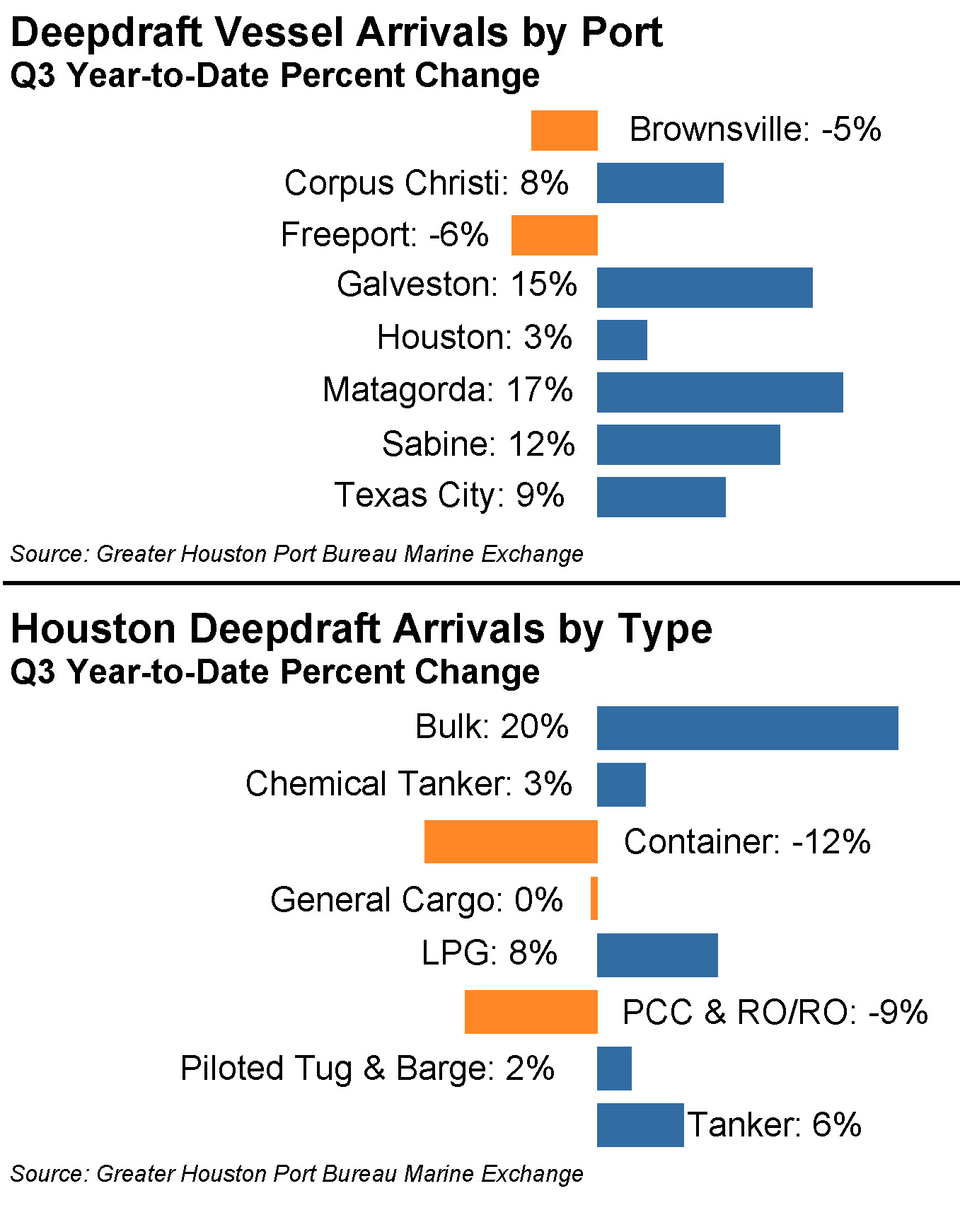 On a port-by-port basis, all but two ports are logging more arrivals in 2022 when compared to the previous year. Brownsville’s tally currently falls 5% short of the prior year. The first month of the third quarter witnessed an arrival-high for 2022 but that was followed by a marked decline precipitated by a pause in cross-border trade activity and decline in chemical exports. Freeport lags last year by 6% after experiencing its first quarter without a triple-digit-arrival month since the depths of Covid. Supply chain disruptions have adversely impacted car carrier movements along with a tapering in project cargo and tanker activity.

The nearby port of Galveston has seen a pronounced uptick in its arrival tally thanks to the resumption of cruise ship activity. The fact that nary a hurricane approached the Texas coast in 2022 aided in a 15% year-over-year increase for the port. Likewise, the port of Texas City has seen 9% more deepdraft calls than the previous year attributable to an increased demand in petrochemical exports. Unfortunately, Texas City remains far behind its pre-pandemic pace.

Corpus Christi has also been a beneficiary of the heightened demand for chemical tanker cargoes in the western European markets. Its year-to-date arrival count is 8% higher than 2021. Likewise, Sabine is experiencing an active 2022 with a 12% increase in vessel arrivals. While tankers and LPG vessels comprise a sizeable portion of that year-over-year gain, there has been an impressive volume of bulk and general cargo movements reflecting sizeable investments in infrastructure projects. Curiously, chemical tanker movements are trailing 2021’s figures by 4%.

Chemical tanker movements for the port of Houston are up as most of the vessel categories. Writ large, Houston’s arrival count exceeds last year by 4%. The biggest year-over-year gainers are Bulkers at 20%, LPG at 8% and oil tankers with a respectable 6% gain. Car carriers have nearly fallen off the map with its current 22% wane – a reflection of the shortage of high-end chips for new vehicles. Container ship calls were also down 12% year-over-year; however, the post-pandemic demand for imports has pushed the TEU count 17% higher. On the other hand, General Cargo remains flat vis-à-vis the first 3 quarters of 2021. The recent taper may be a function of the uncertainly on the direction of the regional economy as the Federal Reserve aggressively ratchets up interest rates.

After Larsen’s perfect game, there was not any uncertainly as to the outcome of the 1956 World Series. Yet, there was uncertainty as to the future home of the Dodgers who were ultimately relocated to Los Angeles at the end of the following season. Having lost both the Giants and the Dodgers in 1957, New York was in need of at least one more ball team. Consequently, due to the impassioned efforts of William Shea, the New York Metropolitans joined the National League in 1962 – the same year the Houston Colt 45s arrived on scene. Today, the Astros are enjoying the spotlight of the ‘Fall Classic’. Hopefully, they will have an opportunity to accomplish that which the Dodgers could not do on a crisp autumn afternoon in October 1956.

Port of Galveston Aligns on Shore Power Project with Shell, Cruise Lines, CenterPoint, Texas A&MNovember 8, 2022 Tomorrow There Will Be More to DoNovember 3, 2022