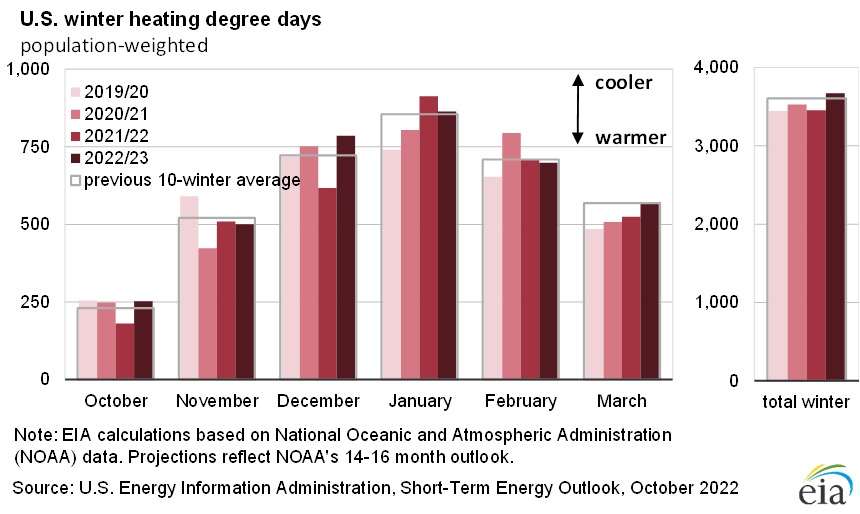 Many households across the United States are likely to spend more on energy in the winter of 2022–23 compared with recent winters. Higher forecast energy expenditures are the result of higher fuel prices, combined with higher heating demand because of a forecast of slightly colder weather than last winter.

Based on forecasts for the Consumer Price Index from the S&P Global macroeconomic model, the U.S. Energy Information Administration (“EIA”) assumes inflation will average 6%–7% this winter compared with last winter. Given that rate of inflation, changes in expenditures and prices adjusted for inflation would be roughly 6%–7% less than the values reported.

For this outlook, EIA defined the winter heating season as October through March. Weather is a key input to their energy consumption forecast and based on the weather forecast from the National Oceanic and Atmospheric Administration (“NOAA”), EIA expects increases in winter energy consumption.

Based on NOAA’s most recent winter forecast, EIA assumes temperatures for the winter of 2022–23 in most of the country will be slightly colder than both last winter and the average winter for the previous 10 winters. Cold weather can affect household heating expenditures in two ways. First, cold weather raises the amount of energy required to keep a house at a specific temperature. Second, because cold weather raises demand and could cause supply disruptions, it can cause energy prices to rise, which could be more severe during a time of low fuel inventories.

Nearly half of all U.S. households heat primarily with natural gas. EIA expects households using natural gas as the primary space heating fuel will spend about $930 this winter, 28% more than they spent last winter. Their forecasted increase in natural gas expenditures is the result of both higher expected prices and consumption.

EIA forecasts that residential natural gas prices will increase in all regions of the United States this winter, with natural gas spot prices at the U.S. benchmark Henry Hub averaging $7.26/MMBtu this winter, up 54% from last winter. EIA expects the largest increase in residential prices to occur in the Midwest, where EIA forecast that prices will average 27% higher than last winter. EIA expects residential natural gas prices to increase by 15% in the South, 17% in the Northeast and 23% in the West. If spot prices continue to rise, retail prices this winter could be even higher than their forecast. 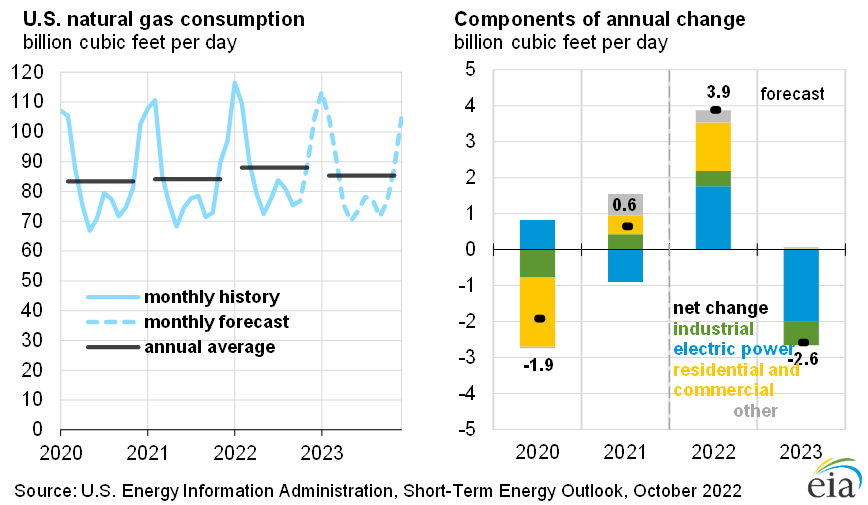 Natural gas inventories. Working natural gas inventories in their forecast reach almost 3.5 trillion cubic feet (“Tcf”) by the end of October, which would be 6% below the previous five-year average. U.S. natural gas storage injections usually take place from April through October, although injections often occur in early November, depending on temperatures and market conditions. Storage withdrawals typically occur from November through March. U.S. natural gas inventories began this injection season at the lowest level in three years because of high heating demand in January and record LNG exports. The above-average withdrawals last winter, combined with more-than-average consumption this summer, contribute to their forecast for below-average storage inventories heading into the winter heating season.

EIA expects that the 4% of U.S. households that use heating oil as the primary space heating fuel will spend about $2,350 on average this winter, up 27% from last winter. The increase in heating oil expenditures reflects their expectations for higher retail heating oil prices and more consumption than last year. EIA forecasts that the average U.S. household will consume about 520 gallons of heating oil this winter, up 9% compared with last winter, which reflects NOAA’s forecast of a colder winter. The retail price of heating oil in their forecast averages $4.54/gal during the winter of 2022–23, up 16% from the previous winter. Higher heating oil prices are driven by higher refining margins than last winter, partly offset by slightly lower crude oil prices.

In the EIA forecast, the Brent crude oil price, which is the most relevant crude oil price in determining U.S. petroleum product prices, averages $2.22/gal, or $93/barrel (“b”) this winter, which would be 7 cents/gal higher than last winter.  EIA expects crude oil price pressures to be more to the upside in the coming month following the OPEC+ announcement of a production cut on October 5, which are reflected in this outlook.

Lower natural gas moving from Russia into Europe may further contribute to lower international distillate availability. With the impending implementation of the European Union’s ban on Russia’s petroleum products in February 2023, the potential for increased fuel switching from natural gas to distillate presents a greater source of price uncertainty than in previous years.

Distillate fuel inventories. Distillate fuel inventories (which include heating oil and diesel fuel) on the East Coast at the end of September were 25.5 million barrels, 45% below the five-year average. Almost 60% of East Coast distillate inventories are in the Northeast. Inventories in the Northeast ended September 57% below the five-year average. Several factors have contributed to low distillate inventories in this region, including limited regional refining capacity, increasing domestic distillate demand in the first half of the year, and low imports as a result of generally tight distillate markets worldwide.

In the context of reduced imports and limited refining capacity, relatively strong distillate demand early in the year contributed to low inventories. Although refining margins are well above their previous five-year high, the ability to increase refinery utilization or yields in response to winter distillate demand is limited. EIA forecasts gross refinery inputs will average 15.8 million barrels per day (“b/d”) this winter, which is 2% lower than last winter. This winter, EIA expects refinery and blender production of distillate fuel will average 4.8 million b/d (almost identical to last winter). 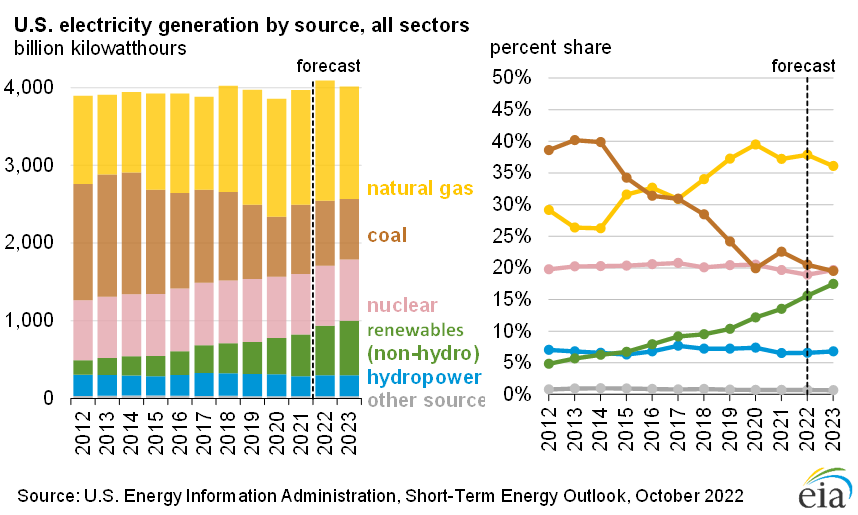 About 5% of all U.S. households use propane as the primary space heating fuel. EIA forecasts that households in the Northeast, Midwest, and South will spend 5% ($80) more, on average, for propane this winter compared with last winter, driven by higher expected consumption. EIA does not forecast expenditures for the West Coast because EIA does not collect propane price data for the West Coast in their surveys.

Propane inventory builds in the United States, and particularly on the Gulf Coast, were limited this summer as a result of global propane market dynamics. U.S. propane exports averaged almost 1.4 million b/d during the first seven months of 2022, the most on record during that period. Global demand of U.S. propane was strong because of rising consumption in the petrochemical sector.

Propane imports and exports. EIA forecasts U.S. propane exports this winter will be greater compared with last winter as a result of strong global demand for propane as a petrochemical feedstock as well as more exports to Europe for winter heating. Propane inventory levels in Western Canada, which are near the five-year average, are increasingly being used for export at their two marine terminals, which may limit the quantity of propane available for import into the Midwest.