Out with the Old, In with the Cold

The Discovery Corps’ winter of 1804 was a brutal one. The Lewis and Clark Expedition chose the confluence of the Knife and Missouri River - an area that would one day be known as North Dakota - for its winter quarters. At Fort Mandan, the explorers were besieged by temperatures as low as -43F forcing guards to be changed at one-half hour intervals and a line of volunteers to assist the blacksmith at his forge. Yet, as the expedition’s members did all they could to combat the bone-chilling cold, they were amazed at the “heartiness” of the nearby Mandan tribe despite the sub-zero temperatures. William Clark observed that these denizens of the north could remain outside all night, “…without fire and very thinly clothed…” without injury. He concluded, the “…customs and the habits of those people has ancred [inured them] to bare more cold than I thought possible for man to indure [sic] . . . .”

It would have certainly been interesting, if not insightful, to solicit the views of the Mandans on the fortitude of Lewis and Clark’s men with respect to Old Man Winter’s wrath. One suspects it may be akin to a resident of Bismarck, North Dakota, commenting on a Houstonian’s reaction to a mid-February cold snap. Where life for some continues unabated when the mercury approaches zero; for others, it is a vice that locks all in its frigid grip. Fortunately, there was no ice in the waterways that serve as Texas marine highways; however, commerce was far cooler at the onset of 2021 when compared against 2020 – for most ports that is. 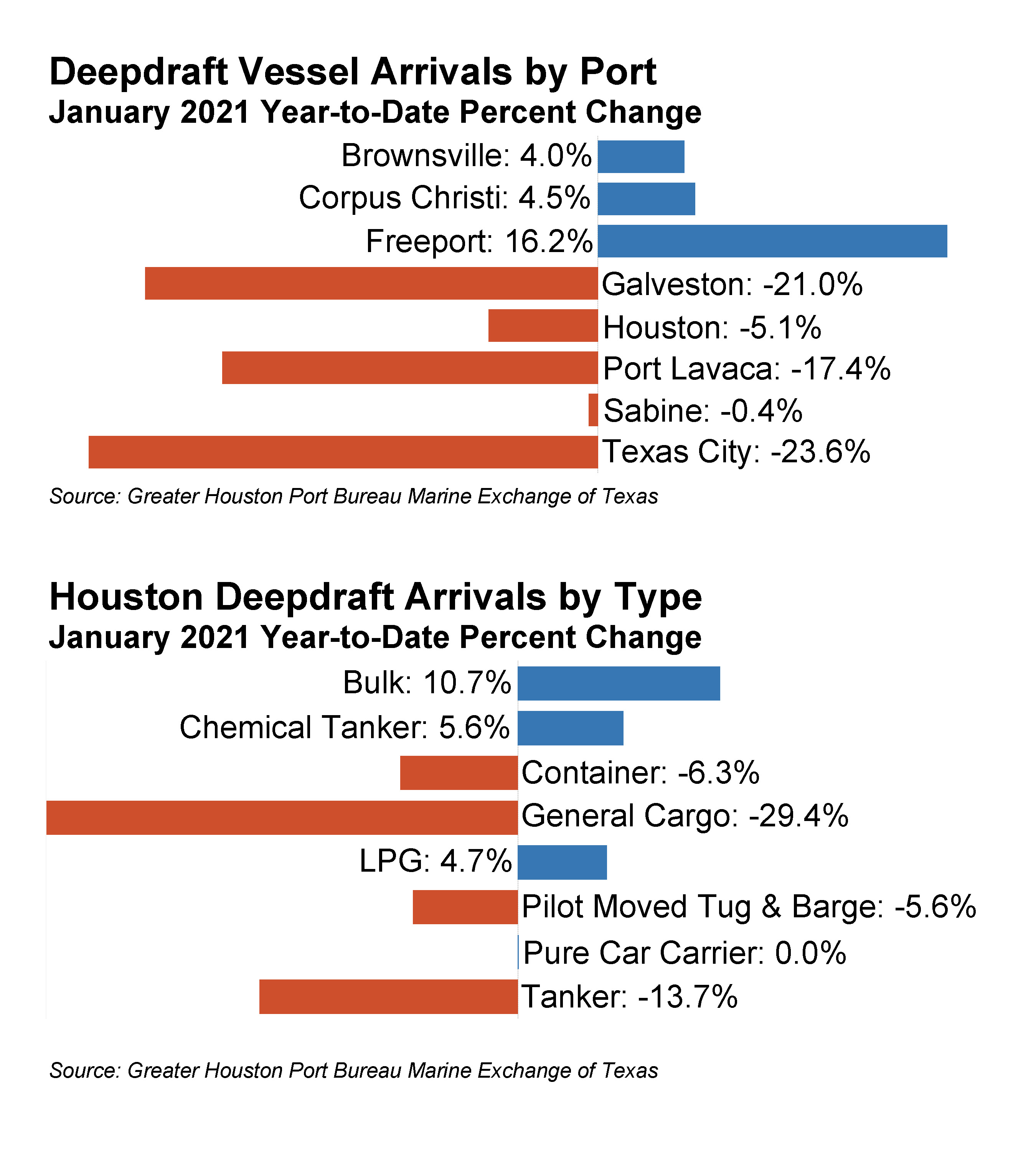 It should come as no surprise - if one has been keeping an eye on regional shipping trends - that the same three ports continue to dominate the positive trend lines. While the remainder of the ports were hard pressed to duplicate the heady trade days of early 2020, the three head turners remain the same: Freeport, Corpus Christi, and Brownsville. Of these three, Corpus Christi was the sole port to experience a monthly decline. Nevertheless, the port was coming off a record month. Consequently, the 8% monthly deficit was still 4.5% higher than January 2020’s arrival count. The big question for Corpus Christi is how many more months of 200-plus arrivals will she log this year as compared to last? The maritime tea leaves foretell that she will chalk up another year of double-digit percentage gains.

Brownsville bested last month by one arrival and did the same vis-à-vis January 2020. After this border port eclipsed 2019’s arrival tallies by 28% in 2020, she is poised to add to those gains in 2021. Freeport posted one of its strongest starts of any year by outdistancing last year’s debut by 16%. The port’s arrival number was its highest in 10 months and is also well positioned to establish itself as a consistent triple-digit-arrival-port. As another $300 million in dredging is dedicated to Freeport, there is little doubt greater volumes of imports and exports will be crossing her docks.

One of the more pleasant surprises in the Texas maritime arena was the port of Sabine’s solid showing. While January 2021 was a slight 0.4% below that of 2020’s January, the most recent arrival numbers were above all of the other months in 2020. Thus, the monthly gain of nearly 14% which was primarily attributable to torrid monthly percentage increases in the LPG and chemical tanker counts.

Galveston kicked off the year 21% off of last year’s numbers; however, it neither gained nor lost ground when compared to the final month of 2020. Texas City suffered its third consecutive monthly dip and had the ignominious distinction of registering the largest percentage drop when the January of 2020 was stacked up against the most recent January. Unfortunately, the malaise that has beset one of the most lucrative railroad port terminals in the nation will require a dose of $70-barrel-oil to shake it from its slumber. Then again, a pricier barrel would add wind to the sails of her sister ports as well.

Like Texas City, the port of Houston closed the books on January with a trio of monthly declines. Hence, the month was 2.8% below that of 2020’s final month and over 5% off of last year’s start. The only vessel category that managed to have a healthy bounce over the preceding month and against the beginning of last year was the bulk carriers at 9% and just shy 11% respectively. General cargo matched its December vessel arrival statistic but fell over 29% short year-over-year. Chemical tankers eclipsed last year’s start by over 5% but that arrival number was still 3% below that of the prior month. Containers matched their month-over-month count but were 6% shy that of last year. LPG arrivals had a better start this year – to the tune of roughly 5% - but fell over 7% during the last month. Tankers could not claim a gain on either front as reflected in a 2% monthly wane and a near-14% plunge year-to-date.

Tows arriving from the high seas lost momentum during the first month of the new year after a respectable performance overall in 2020. The monthly decline matched that of the January-against-January loss of 5.6%. Things were not as staid on the inland tow front as 4% more tows navigated across the Houston Ship Channel. Nevertheless, 2020 had a far more positive start than 21 – 14.5% more to be precise.

The first full month of winter tends to be a bit of a bell weather as to how commerce will flow ‘to and fro’ the Lone Star State’s ports. Alas, like everything else, past results are not necessarily an indication of future performance. Be that as it may, parting ways with a tempestuous 2020 gave rise to a hope for better things on the horizon. Such was the sentiment of the Discovery Corps when 1805 dawned. They were eager to shake off the winter blues and introduce the neighboring Mandans to New Year festivities. Thus, the intrepid explorers descended upon their village with fiddle and dance. The Mandans sat wide-eyed as they watched a Frenchman dance on his head and hands and the hulking York move with the agility of a small child. When the fires had ebbed and the bellies were full, it no longer mattered to the Mandans that these strangers from afar were not accustomed to their winters for the traveler’s spirit had brought warmth to their remote village.